The charges stem from allegations that Spacey groped the 18-year-old son of a former local Boston news anchor at a Nantucket bar, the Boston Globe reported. Cape and Islands District Attorney Michael O’Keefe confirmed that Spacey will be arraigned for indecent assault and battery at Nantucket District Court on Jan. 7.

Unruh said that her son met Spacey late on a late July night at Club Car Restaurant and Bar on Nantucket. The young man told Spacey that he was of age to drink alcohol, and the actor bought him “drink, after drink, after drink,” Unruh said

Once the teen was intoxicated, Spacey reached his hands down the young man’s pants and groped his genitals, Unruh said.

“The victim, my son, was a star-struck, straight, 18-year-old young man who had no idea that the famous actor was an alleged sexual predator— or that he was about to be his next victim,” Unruh said.

When Spacey stepped away to use the bathroom, another bar patron encouraged the young man to run, Unruh said, according to the Globe. He hurried off to his grandmother’s house and told his family what happened.

Spacey wrote on Twitter last year that he does not remember his encounter with Rapp, adding, “But if I did behave as he describes, I owe him the sincerest apology for what would have been deeply inappropriate drunken behavior, and I am sorry for the feelings he describes having carried with him all these years.” Spacey also used the Twitter post to come out as gay.

Since the allegations emerged, Spacey has been dropped from a number of projects, including the Netflix series House of Cards.

Spacey did not immediately respond to a request for comment. However, on Monday he released a bizarre video in which he reprised his House of Cards character, Frank Underwood. In the video, he references unspecified accusations against him and says that he won’t take the fall for things he didn’t do, even if he has acknowledged other charges. 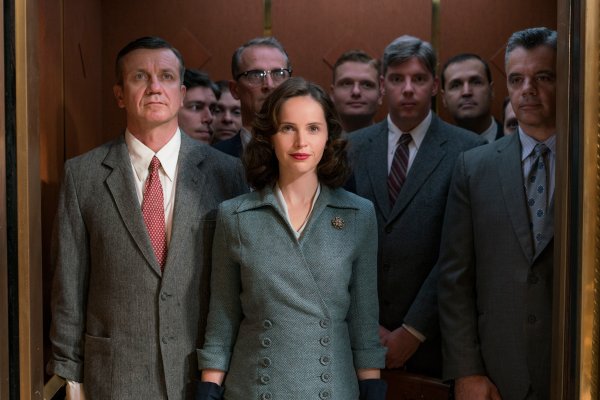 The True Story Behind the Ruth Bader Ginsburg Movie On the Basis of Sex
Next Up: Editor's Pick