Meghan Markle Stole the Show at the British Fashion Awards

Only invite a Duchess to an event if you’re prepared for her to steal the show.

That’s the way of the world — especially Meghan Markle‘s world. The Duchess of Sussex made a surprise appearance at the British Fashion Awards on Monday night, popping up at the Royal Albert Hall in London to present an award to her wedding dress designer, Clare Waight Keller. Waight Keller, who is the artistic director of fashion house Givenchy, was bestowed with the British Womenswear Designer of the Year award, given to her by both Markle and Gone Girl actress Rosamund Pike.

But naturally, most eyes were on the royal in the midst of the fashionable spectacle, who was decked out in a black one-shoulder dress by Waight Keller. “I recently read that the culture of fashion has changed from where it was once ‘cool to be cruel’ to now where it is ‘cool to be kind,'” Markle said in her address to Waight Keller. “I feel especially proud to announce tonight’s winner, who is a British designer leading on the global stage with vision and creativity, but also with incredible kindness.”

Since marrying Prince Harry in May, Markle has proceeded to remain a public figure, participating in royal events, publishing a charity cookbook, taking an official tour of Australia and New Zealand with her husband and announcing her pregnancy this fall. (She’s due in the spring.) Markle and Harry also recently announced they will soon be moving to the town of Windsor just outside London, where they will be making their home at Frogmore Cottage. 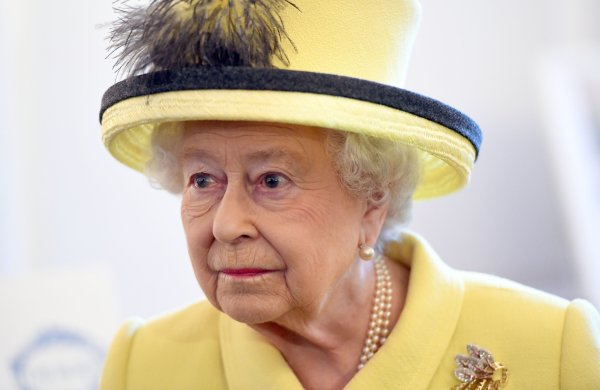 9-Year-Old Boy Tries to Hide From Queen Elizabeth Because He Can't Handle the Majesty of It All
Next Up: Editor's Pick