How Green Book's Screenwriter Was Inspired to Write the Movie

Nick Vallelonga grew up in a quintessential Italian family in a tight-knit, 1960s Bronx community — they went to church, his mother cooked, his father ate.

But something differentiated him and his younger brother from the rest of the neighborhood boys: their father was best friends with a world-renowned black piano prodigy in a time and place where interracial friendships were uncommon. That friendship is the subject of the movie Green Book, which arrives in limited theaters Nov. 16 and is co-written by Vallelonga, Brian Hayes Currie and director Peter Farrelly. Green Book is nominated for five Oscars, including Best Picture, Best Actor, Best Supporting Actor, Best Original Screenplay and Best Film Editing.

Vallelonga’s father, Frank Anthony Vallelonga, compassionately called Tony Lip (nicknamed for his ability to talk his way out of anything), really did meet pianist Don Shirley (played by Moonlight‘s Oscar-winning Mahershala Ali) through his work as a bouncer at the Copacabana night club in New York City. The two really did take a road trip together through the Jim Crow South for Shirley’s concert tour in 1962, as the film chronicles. Lip, who had no musical promise himself, was hired as a driver and protector for Shirley amid the dangers posed by such a journey for a black man in the deep South.

And, yes, Tony Lip — played by Viggo Mortensen — really did eat 25 hot dogs in one sitting.

According to Vallelonga, everything depicted in the film Green Book happened in real life.

“I wanted the feelings to come from the truth, because the story is so amazing that the truth is enough,” Vallelonga tells TIME. “I felt that we could not make up a scene in this movie.”

Given the story’s historical context, Green Book is as much a window into 1960s race relations as it is a loving remembrance of the senior Vallelonga’s friendship with Shirley. Some critics have characterized the film’s view of racism as “tone-deaf” or “quaint.” In one scene, for example, Lip persuades Shirley to try fried chicken, which the pianist claims to hate, and is validated when Shirley finds it to be delicious. But the movie is resonating with audiences and critics alike — it won the People’s Choice Award at the Toronto International Film Festival and has enjoyed overwhelmingly glowing reviews.

For his part, Vallelonga says he didn’t set out to make a movie about the world. He just wanted to show the world through the characters’ eyes. “It’s about the two guys in the car. It’s really about their relationship, and what they were going through during this horrendous time in our history,” Vallelonga says.

Here’s how that friendship made their way to the screen, and what happened in the half-century that followed the events of the movie.

Dr. Shirley gave his blessing for the movie, with one key stipulation

Tony Lip and Don Shirley died within five months of each other in January and April 2013, respectively. It was during the late 1980s that Nick Vallelonga told the pair he wanted to make a movie based on their experiences.

Shirley’s response: Do it — but “not until after I’m gone,” Vallelonga recalls.

Vallelonga says that he tried to reason with Dr. Shirley, as he still affectionately calls him, explaining that he could take out any anecdote that Shirley didn’t want told. But Shirley was adamant.

“‘You should put in everything your father told you, and everything I told you,'” Vallelonga recalls Shirley saying. “‘You tell exactly the truth, but you’re going to wait until I pass.'”

Vallelonga honed all the details of his father’s and Shirley’s trip down South, keeping tabs on every letter Tony had written to his wife, Dolores (which, as the movie shows, were really co-authored by Shirley) — making sure he had the story right for whenever the time came to actually write it.

Shirley was “on his own sort of island”

Though Vallelonga says he does not know why Shirley wanted him to wait, audiences might guess, like Vallelonga does, that Shirley’s sexuality played a role. “I think that’s the reason he wanted me to wait — he didn’t tell me that, but that’s what I assume,” he says.

In one scene in the movie, Vallelonga comes to the rescue of Shirley, who has been handcuffed to the shower at a YMCA after a cop caught him having sex with another man.

“He never came out that he was gay. It was never spoken of,” says Vallelonga, who never heard any stories about the subject beyond the one at the YMCA. But still, Shirley was committed to the full truth of his and his friend’s story when the time came for it to be told.

Vallelonga posits that Shirley kept himself isolated, as Green Book shows, because his own genius was too much to bear.

“I think he was on his own sort of island. It’s not a dramatization in the film: he was just by himself,” Vallelonga says, adding that Shirley didn’t even want his own family consulted for the movie.

This loneliness — and, possibly, depression — is what contributed to Shirley’s heavy drinking, consuming almost an entire bottle of scotch daily during the concert tour. (Vallelonga specifies that his father never used the word “alcoholic” to describe Shirley.)

Tony Lip emerged from the road trip a changed man

Green Book does not hold back in depicting Lip as racist, both before embarking on the road trip, and during the first part of the pair’s travels. He refers to black people using racial slurs and throws away glasses that black servicemen drank out of while doing work in his home. He frequently makes assumptions about Shirley — the music he must like, the food he must eat — based on stereotypes about his “people.”

“My dad was a product of the times and his environment — and that’s not an excuse for anything,” Vallelonga says. “All that went away after he became friends with Dr. Shirley, and after this crazy trip they took together and what happened to them.”

Vallelonga explains his father’s personal growth as a result of not only his blossoming friendship with Shirley, but also seeing the atrocities of Jim Crow firsthand. “Now, it wasn’t just something you heard about — he saw it, he witnessed it,” Vallelonga says. Lip saw the ways in which Shirley was treated, from humiliating discrimination to brutal violence. “My father was outraged by it,” Vallelonga says of Shirley’s multiple beatings down South; the fact that he couldn’t use the restroom or eat in restaurants where he was performing; the fact that Lip had to use the Negro Motorist’s Green Book, for which the film is named, to find “negroes-only” hotels for Shirley.

Several scenes in the movie — often taking place in the pair’s teal blue car — depict Shirley educating Lip on some facet of his own racist tendencies. It’s an aspect of the film that some have criticized: a black man having to teach a white man how not to be racist, and the feel-good ending when he appears to in fact have shaken those tendencies once and for all. (Some of these critiques also note that all three of the movie’s screenwriters are white.) Still, Vallelonga insists his father was never the same.

“This particular trip really, really affected him and changed him. It changed the way he brought us up,” he says, “that everyone is equal and everyone is the same.”

A year and a half on the road

The road trip that forged a lifelong bond actually lasted one and a half years, not just two months, as the movie shows. Essentially, that’s the only creative license the filmmakers took with the story, Vallelonga says. Some cities and events are incongruous with the real-life timeline, but the events of Green Book did happen at one point during their year and a half traveling together.

In the film, Shirley and Lip end up in jail after Lip punches a police officer, enraged by the latter’s use of a derogatory term for Italians. Shirley gets them out of jail by calling then Attorney General Robert Kennedy.

Vallelonga says that while this entire scenario did happen, it actually occurred one year later, during another stint of road-travel (after the Christmas break that concludes the film). In real life, when Shirley called Kennedy to get out of jail, it was in the fall of 1963 — just days before the assassination of his brother, President John F. Kennedy.

Robert Kennedy was one of many important friends Shirley had, Vallelonga explains, but many of these high-profile relationships were kept hidden by the private Shirley. He was also friends with Dr. Martin Luther King, Jr., Vallelonga says, but he chose to keep even his civil rights work quiet.

In the decades following the pair’s road trip, their friendship grew deeper. Vallelonga remembers taking photos with the artifacts in Shirley’s apartment above Carnegie Hall. Shirley’s musical career continued, though he never quite achieved the status of a household name. Lip continued working at the “Copa” for awhile before finding his way into the entertainment industry, acting in both films and TV shows from the 1970s through the early 2000s — even landing a recurring role on The Sopranos.

Perhaps Shirley’s help with Lip’s letter-writing really did have an impact: in 2005, Lip — whose healthy appetite the movie depicts — co-authored a book, aptly titled Shut Up And Eat!

Tony Lip, with his larger-than-life personality, colorful language and penchant for breaking up fights, couldn’t have been more different from Don Shirley, the virtuoso who sat silently on a “throne,” as Lip called it, refusing to eat with his hands and speaking with aristocratic diction.

But they were as close as friends could be, Vallelonga says. “He listened to Dr. Shirley,” Vallelonga says of his father — and the rest of the family listened, too.

Green Book ends with the entire Vallelonga family welcoming Shirley to Christmas dinner at their home. “Everything changed from that moment on,” Vallelonga explains. He hopes this true story will inspire viewers to open their hearts, just as Lip and Shirley did.

“I think that’s why it resonates — because it’s truthful,” he says. 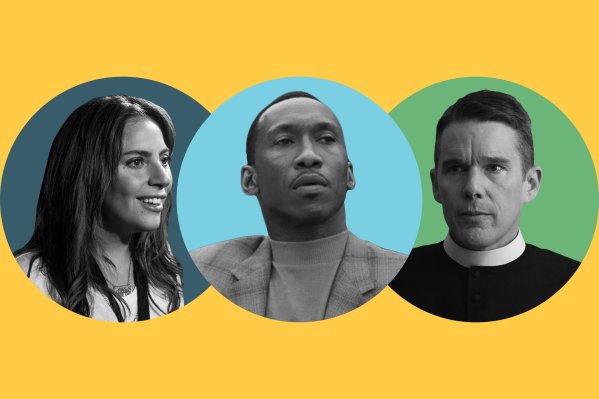 The 10 Best Movie Performances of 2018
Next Up: Editor's Pick