When the FBI report on sexual misconduct allegations against Supreme Court nominee Brett Kavanaugh made its way to the Senate Thursday morning, it looked increasingly likely that Kavanaugh would be confirmed—but as the day evolved, only one undecided Senator announced a position, and it became clear that Republicans’ efforts to secure the necessary votes would likely come down to the wire.

Early in the day, Sen. Jeff Flake of Arizona and Sen. Susan Collins of Maine—two of the most crucial Republican swing votes in the confirmation battle—initially appeared satisfied with the results of an FBI investigation into sexual misconduct allegations. Their comments came after Senate Judiciary Chairman Chuck Grassley said the investigation found “no hint of misconduct” while Senate Democrats called the investigation “incomplete” and suggested the White House may have restricted the FBI’s ability to fully investigate.

“It appears to be a very thorough investigation,” Collins told CNN after being briefed on the report. She said she planned to read the full report later in the day.

Flake, for his part, said the report did not change his tentative support for Kavanaugh. “We’ve seen no additional corroborating information,” he told CNN.

Collins had returned to read the report and Flake remained an evasive presence in the Capitol. When Senate Majority Leader Mitch McConnell and five members of the judiciary committee on which Flake sits held a press conference expressing confidence that there would be a vote on Kavanaugh this Saturday, Flake was not present. During the press conference, Republicans claimed that the report did not corroborate any of the allegations, arguing that Kavanaugh had been tormented enough through the process and it was now time to vote. “Judge Kavanaugh should be confirmed on Saturday,” said Grassley.

But even as the Republicans were touting that schedule—a procedural vote on Friday capped off by a confirmation vote on Saturday—no votes had officially been announced as of 5 p.m on Thursday.

By Thursday afternoon, Democratic Sen. Heidi Heitkamp, who had also been publicly undecided, said that she would vote against confirming Kavanaugh. “As I said after Judge Kavanaugh was nominated, and as I’ve continued to say throughout this process, I consider vetting nominees to serve on the U.S. Supreme Court as one of the most important jobs of any U.S. senator – and I take that job very seriously,” Heitkamp said in a statement. “That’s what North Dakotans expect of their senators, which is why I met with Judge Kavanaugh, closely watched his hearings, and reviewed his available record during this evaluation process – including the nonpartisan FBI investigation which I called for. After doing my due diligence and now that the record is apparently closed, I will vote against his confirmation.”

After Heitkamp’s decision, four Senators—three Republicans and one Democrats—remained publicly undecided about their votes on Thursday. In addition to Collins and Flake, Republican Sen. Lisa Murkowski said she had read the report but has not said which way she will vote, and Democratic Sen. Joe Manchin of West Virginia said that he, too, had not made a decision after being briefed on the report. Republicans need 50 votes to confirm Kavanaugh, as Vice President Mike Pence can break a tie in the Senate.

After days of speculation and partisan infighting, the Senate Judiciary Committee rreceived the FBI report from the White House at 2:30 a.m. Thursday. The report, which is only available in hard copy, is being held in the Sensitive Compartment Information Facility in the Capitol. Only Senators and ten staff members who have the requisite security clearances can view it.

Here’s what Grassley said about the report:

The White House delivered the report to the Senate just hours after Senate Majority Leader Mitch McConnell officially kicked off the procedural process for Kavanaugh’s confirmation vote on the Senate floor.

“With this additional information, the White House is fully confident the Senate will vote to confirm Judge Kavanaugh to the Supreme Court,” White House spokesman Raj Shah said in a statement.

Senate Democrats quickly challenged Grassley’s interpretation of the report. Sen. Dianne Feinstein, the ranking Democrat on the judiciary committee, said that after reading part of the report, she believed it was “the product of an incomplete investigation.” She also suggested the White House may have restricted the FBI’s ability to throughly investigate. And Senate Minority Leader Chuck Schumer, who was briefed on the report, said he disagreed with Grassley’s view that the investigation “found no hint of misconduct” and added that Democrats had “many fears” going into the process and now “those fears have been realized.”

The process of the supplemental background check, like Kavanaugh’s confirmation process itself, has been fraught with partisan tension. Republicans were coerced into a background check last week, when Flake, who sits on the judiciary committee, said his vote to move Kavanaugh’s confirmation to the Senate floor was conditional on a new FBI investigation. Flake was backed by Collins and Murkowski, and West Virginia Sen. Joe Manchin, a Democrat. McConnell, clearly lacking the necessary votes to confirm Kavanaugh, was forced to concede to their demands. But reports soon emerged that the White House was limiting the scope of the investigation, even after Trump said the FBI could interview anyone agents thought necessary.

Kavanaugh’s confirmation, which had appeared to be almost a sure thing, was thrust into doubt when Christine Blasey Ford, a California psychology professor, came forward publicly and alleged that Kavanaugh had assaulted her when they were teenagers over three decades ago. Two other women, Deborah Ramirez and Julie Swetnick, have since come forward with their own allegations. Ramirez alleged that Kavanaugh exposed himself to her when they were at Yale University, and Swetnick has claimed she was gang raped at a party Kavanaugh attended when they were in high school, and she witnessed him at other parties spiking alcohol in an attempt to get women inebriated. Kavanaugh has repeatedly denied all the allegations.

Both Ford and Kavanaugh testified before the Senate judiciary committee last week. But the FBI investigation did not include interviews with either one of them. Republicans argued that their testimonies in front of the committee should be sufficient. Shah said Thursday that the investigation consisted of ten witness interviews. These include Mark Judge, who Ford alleges was the only other witness in the room when Kavanaugh assaulted her, and Ramirez.

The investigation did not encompass Swetnick’s allegations, according to lawmakers and her attorney Michael Avenatti.

But both Ford and Ramirez’s legal teams expressed dissatisfaction with the scope of the investigation. Ford’s lawyers protested the fact that she hadn’t been interviewed, and Ramirez’s lawyers said she had provided the FBI with 20 witnesses who could corroborate her account. They say the FBI interviewed none of them.

In a letter to FBI Director Christopher Wray, Ramirez’s attorneys wrote they were “deeply disappointed” by the investigation.

“We can only conclude that the FBI – or those controlling the investigation – did not want to learn the truth behind Ramirez’s allegation,” they wrote.

Despite these concerns, Grassley said he believed the FBI had done its job properly.

“I trust that the career agents of the FBI have done their work independent of political or partisan considerations. That’s exactly what senators from both sides asked for. Now it’s up to senators to fulfill their constitutional duty and make a judgment,” Grassley said.

He added that a “presumption of innocence” should prevail and called on other Senators to move past the investigation.

“Fundamentally, we senators ought to wipe away the muck from all the mudslinging and politics and look at this nomination with clear eyes,” Grassley said. “It’s time to vote. I’ll be voting to confirm Judge Kavanaugh.”

Some other Republicans who were briefed on the report on Thursday seemed to agree with Grassley that the FBI report did not change their minds.

Sen. Lindsey Graham, who sits on the judiciary committee, said he was “more confident then ever”that Kavanaugh would be confirmed following the FBI report. “I’ve learned nothing I didn’t already know [about the allegations]” he told reporters.

Graham also pushed back on the notion that the White House has constrained the FBI, arguing that they were given the necessary latitude, although he conceded it probably should have been done earlier.

Republican Sen. Bob Corker of Tennessee echoed these comments on Thursday. “The supplemental background investigation found absolutely zero corroboration of the allegations that have been made. I plan to vote for Judge Kavanaugh and believe he will be confirmed very soon,” Corker tweeted.

Some Democrats, while careful not to provide specific information, implied that their Republican colleagues were purposely trying to comport the latest FBI report to fit with their need to see Kavanaugh confirmed. “You can’t find what you don’t look for,” said Coons, who is good friends with Flake and was instrumental in helping strike a deal for a weeklong FBI investigation.

Other Democratic Senators agreed they did not see new information in the report, but said that was due to the limits on the investigation rather than a lack of evidence. “This so-called investigation leaves a lot more questions than answers,” California Sen. Kamala Harris, who sits on the judiciary committee, said Thursday. When asked if she saw anything new in the report, she immediately replied “Nope.” 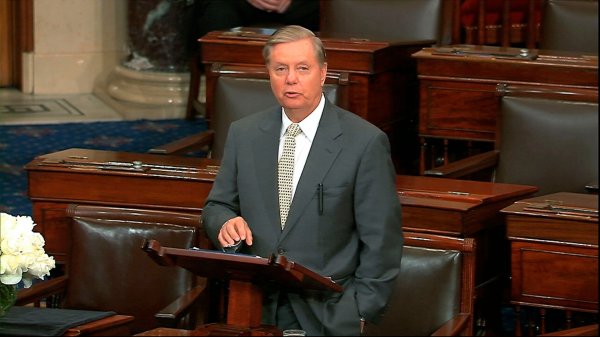