Prince George was a total ham at the wedding of Sophie Carter and Robert Snuggs in Norfolk, England this weekend.

Upstaging the happy couple at weddings is par for the course for Prince George. And at Saturday’s ceremony he did not disappoint.

As the official leader of the pageboys, Prince George put some very playful shenanigans on display.

After the ceremony, cameras captured the world’s most notable five-year-old playing pretend. The smiley little one marched around like a soldier with stiff arms in his baby blue knickerbockers to the delight of royal fans everywhere.

The bride is Prince George’s mother Kate Middleton’s close friend from childhood, who also serves as a godparent to George’s younger sister, Princess Charlotte, who had bridesmaids duties.

It appears Charlotte was in less of a party mood this time around, at least when photographers were on the scene. But one thing is for sure: leave it to cute kids to upstage the nuptials every time. Seven little kids played roles in the wedding.

George’s father, Prince William, has made it known that the little tyke loves police and dinosaurs.

Let’s add soldiers to the list of his favorites. 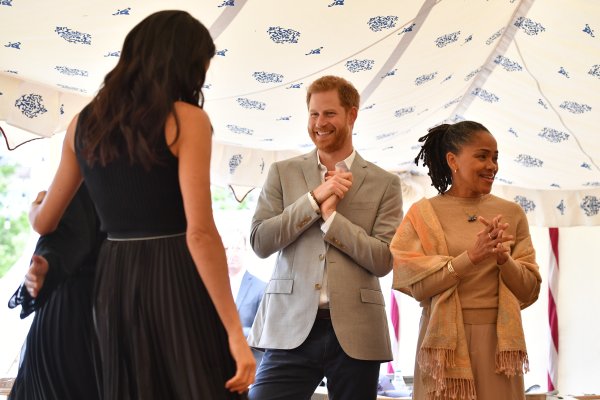 Prince Harry Pulled a Hilariously Mischievous Move at His Wife's Cookbook Party
Next Up: Editor's Pick