As a solo artist, rock star Harry Styles has made bold printed suits into his signature look. You rarely see the singer out wearing anything other than an eccentrically-styled jacket and pants, and he has even become the face of Gucci in its zany print combos.

So perhaps it was only a matter of time before the “Sign of the Times” musician came in for some internet scrutiny about the origin of his fashion sense. And it looks like the hive mind has figured it all out: Styles is taking inspiration from Gonzo the Great, the blue alien Muppet famous for his long, distinctive nose, big eyes and generally natty attire.

You can’t fight with facts, and these images are proof-positive that Gonzo and Styles have more than a little in common when it comes to dress concepts. And fans are even pointing out that Gonzo’s signature poses—and, perhaps, his confident persona—also echo Styles’s preferred ways of hamming it up for the camera.

It’s been a big week for the Muppets in pop culture: earlier in the week, Bert and Ernie were in the spotlight after a former Muppets Show writer shared his opinions on the basis of their relationship, sparking Sesame Street to respond with an official statement. We’ll have to see if Sesame Street also wants to weigh in on the Styles and Gonzo fashion question. 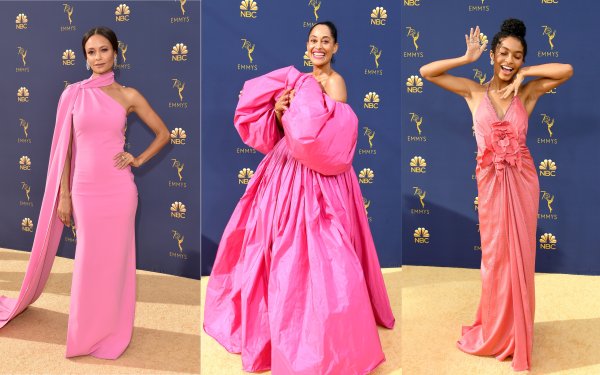 Stars Make a Compelling Case For Hot Pink As This Fall's Best Color Trend at the 2018 Emmys
Next Up: Editor's Pick