As her husband Alexis Ohanian puts it, tennis star Serena Williams had a “great first day back at the [New York] office” this week as she kicked off her return to the tennis courts with a winning round against Poland’s Magda Linette at the 2018 U.S. Open on Sunday.

We know the Reddit co-founder and father of baby Alexis, Jr. is a supportive husband already, of course. But it doesn’t hurt that his appearance at the Billie Jean King National Tennis Center to watch Williams play just added to the evidence, giving us more fuel to respect his commitment to seeing his wife succeed. Case in point: an adoring photo of Ohanian spectating on the match that has been making the Twitter rounds. After fans began circulating the image, Ohanian himself retweeted it — because sometimes a photo really is worth a thousand words (or, in the case of Twitter, 280 characters).

Ohanian will have more chances to cheer Williams on this week; on Wednesday, she plays Germany’s Carina Witthöft in the Round of 64. This is Williams’s first time back to the U.S. Open competition since 2016, after which she gave birth to her daughter. At this summer’s Wimbledon tournament, she finished second behind Angelique Kerber. There’s a chance Serena could also go on to play her big sister Venus Williams during this year’s competition, too. 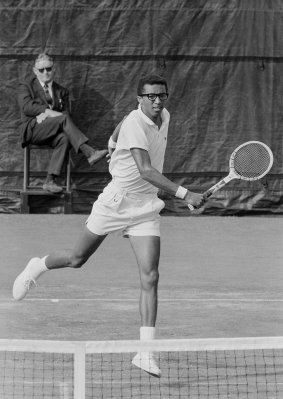