As royal newlyweds, Prince Harry and Meghan Markle have to walk a careful line: while they’ve often proved themselves to be affectionate partners, royal protocol dictates that sometimes they have to scale back their public displays of affection.

But at a reception this week, the Duke and Duchess of Sussex proved they’re still able to find small ways to share their love in public, even if it’s in the slightest of gestures. Cameras captured Markle and Prince Harry holding hands as they walked into an event celebrating the Commonwealth Secretariat’s Youth Leadership Workshop in London on July 5 at Marlborough House.

At the event, Prince Harry gave a brief speech while Markle looked on, dressed to stand out in a sunshine-yellow dress. She was snapped enjoying the day’s activities, as Harry — a Commonwealth Youth Ambassador — extolled their joint interest in getting to know the leaders being recognized.

So why is holding hands so noteworthy? Hand holding can be a fraught practice in the world of royal etiquette. While there is no official rule outlawing the clasp, there are situations — depending on the formality of the event — in which it can be perceived as a no-no, as former royal butler Grant Harrold previously explained to TIME. But while Harry’s older brother Prince William and Kate Middleton tend to go “by the book” when it comes to their behavior with each other, Prince Harry has some leeway to go about “re-writing the etiquette rules” for a younger generation.

Not that there aren’t instances where the pair hasn’t held hands. Just last week, for instance, a video at a formal event with the Queen stirred conversation about public displays of affection for the royal family. 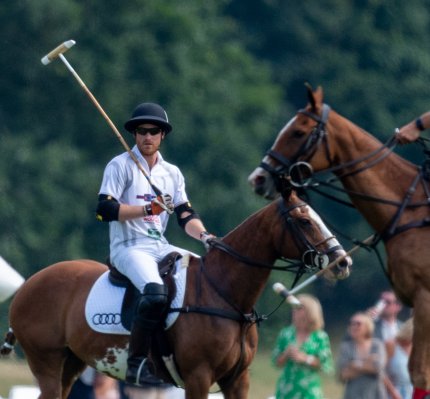 Of Course Meghan Markle Cheered on Prince Harry at Polo
Next Up: Editor's Pick