Prince Louis Is to Emerge Back Into the Spotlight at His Christening. Here's What to Expect

Since his birth on April 23, young Prince Louis of Cambridge has stayed mostly (and understandably) out of the spotlight. But on July 9, he’ll be the star of the show, as Prince William and Catherine, Duchess of Cambridge have announced that’s the date for the official christening of their third child.

Following in the tradition of all the other royal children — including his older brother Prince George and Princess Charlotte — Prince Louis will be welcomed into the Church of England at the ceremony, presided over by the Archbishop of Canterbury at the Chapel Royal at St. James’s Palace in London. His godparents will also be announced at the event. Here’s what to expect.

When is the christening?

It’s set to take place on Monday, July 9, according to a statement from the Duke and Duchess of Cambridge released via the palace. No further details of timing have been shared; Princess Charlotte’s took place at 4:30 p.m. in England, however, so it’s likely it will be an afternoon event.

Where is the christening?

The christening will take place at the Chapel Royal in St. James’s Palace in London. It’s the same spot that Prince George had his big day — although Princess Charlotte’s was at the Church of St Mary Magdalene in Sandringham. The Chapel Royal has a special tie to Prince William and his family, as it’s where his late mother’s coffin was held for a week before her funeral, and where Kate Middleton received communion just prior to her own royal wedding.

What is a christening?

A christening is a baptism in the tradition of the Church of England, in which the child is anointed with holy water and welcomed into the religious tradition.

Who is performing the christening?

Justin Welby, the Archbishop of Canterbury, will be doing the honors of performing the christening. Welby recently had another important role for the royal family: he also presided over the royal wedding of Prince Harry and Meghan Markle at Windsor Castle in May. And he’s got some practice at this particular event, as he christened both Prince George and Princess Charlotte, too.

Who will be at the christening?

Prince Louis’s parents Prince William and Kate Middleton will of course be in attendance, most likely joined by Prince George and Princess Charlotte, marking the first official public outing of their whole family since Louis’s birth. The Queen herself also came to the other siblings’ christenings, so it’s likely she’ll come to this one as well; Prince Louis is now fifth in line to the throne, after all. If he is up to it, Prince Philip may join her, and we can expect Prince Louis’s grandfather Prince Charles and Camilla, Duchess of Cornwall to also be there for the special moment.

As for Prince Harry and Meghan Markle, the couple of the moment? They’re scheduled to be in Ireland for an official royal visit on July 10 and 11, so it remains to be seen if they’ll be able to drop by the christening the day before. 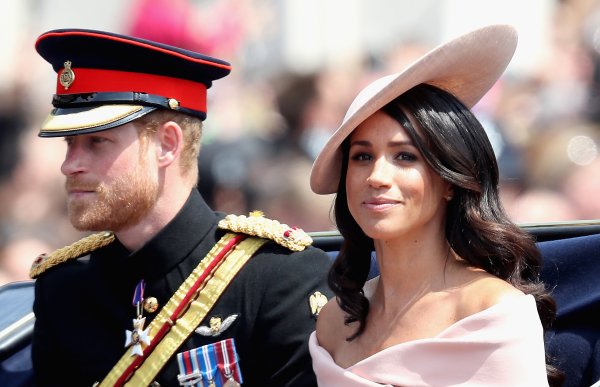 Meghan Markle and Prince Harry Were Weekend Wedding Guests
Next Up: Editor's Pick