It has become a waking national nightmare, a recurring horror that we can’t explain or defend but that we are condemned to repeat. We know it will happen again. We seem helpless to stop it.

The latest nightmare began on May 18 with the news: there had been another school shooting. This time, it unfolded at Santa Fe High School in Santa Fe, Texas, a town of about 12,000 people clustered around a sun-soaked highway southeast of Houston. As the reports came in from law enforcement and medical personnel, it became clear that this had been a deadly event. Ten people were killed, including eight students and two teachers: Jared Black, 17; Shana Fisher, 16; Christian Riley Garcia, 15; Aaron Kyle McLeod, 15; Angelique Ramirez, 15; Sabika Sheikh, 17; Christopher Jake Stone, 17; Kimberly Vaughan, 14; Glenda Ann Perkins, 64; and Cynthia Tisdale, 63.

The sense of inevitability was most powerful, and most disturbing, at the scene itself. Paige Curry, a student at the school, was interviewed by a local TV reporter. “Was there a part of you that was like, This isn’t real. This would not happen at my school?” the reporter asked. Curry looked up and almost laughed. No, she said. It didn’t feel unreal at all. “It’s been happening everywhere,” she said. “I’ve always kind of felt eventually it would happen here too.”

By May 19, we had learned about the victims, read their bios and seen the photos they had posted on social media. In many pictures, the dead kids are smiling, posing with Snapchat filters or dressed up for a dance, beautiful and awkward in that teenage way. They didn’t know they were about to die.

We also learned about the killer. This time, he was a 17-year-old student at the school. He’d gotten ahold of his father’s guns. On the day of the attack, he’d reportedly worn a T-shirt emblazoned with the words Born To Kill. One of the victim’s mothers said her daughter had rebuffed his advances. But who knows why someone murders his peers.

The sense of entrapment truly sets in when our chosen leaders step onto the public stage. It’s as if they are all reading off the same teleprompter. Tweeting from their iPhones, elected officials offer their deepest condolences. They send their thoughts and prayers. If their words feel familiar, it is perhaps because the same public figures spoke and tweeted nearly the same sentences in February, in the wake of the shooting at Marjory Stoneman Douglas High School in Parkland, Fla. That time, 17 died: 14 students and three staff members.

After Parkland, President Trump offered a grab bag of solutions: strengthen background checks, ban bump stocks, arm teachers. Congress passed no new laws. The prospect of political changes that might end our ongoing nightmare looks no better this time. Texas Governor Greg Abbott, a Republican and staunch gun-rights advocate, prayed with the families who had lost loved ones and promised action. This will never happen again in Texas, he said. By Sunday, the focus was on designing schools with fewer entrances and exits.

Communities react differently to these tragedies. In suburban Parkland, students ignited a national conversation around gun violence, helping to push legislation in Florida and beyond. Oregon expanded a law banning those convicted of stalking or domestic violence from owning guns. Florida, Maryland and Vermont joined Rhode Island, Connecticut, California, Oregon, Washington and Indiana in establishing “red flag” policies, giving law enforcement the power to confiscate guns from people who make threats of violence online or in person. In Santa Fe, the largely rural community’s reaction was more muted. Students and their parents, on the whole, stopped short of demanding stricter gun-control laws. But in the nearest large city, Houston police chief Art Acevedo echoed the Parkland kids’ calls for action.

National polls show that roughly two-thirds of Americans believe there should be tighter gun restrictions. A Quinnipiac University poll from February broke down that support by proposal: 97% of Americans support universal background checks; 83% support mandatory waiting periods for firearm purchases; 67% support an assault-weapon ban. But the politics are tricky, and in the world of lobbying, there’s plenty of money in intransigence. Two weeks before the shooting at Santa Fe High School, Trump addressed the annual convention of the National Rifle Association. “Your Second Amendment rights are under siege,” he told the crowd, “but they will never, ever be under siege as long as I’m your President.”

Will we ever wake from this ongoing horror? The story of the Santa Fe shooting seemed to end the same way it always does, with the inevitable candlelit vigil and the images of tear-streaked teenagers burying their faces in their friends’ necks. There was no dramatic climax, no indication that this time things will change. By May 21, most of the TV trucks had left the school parking lot. The teddy bears and drugstore bouquets piled on the school lawn had begun to wilt in the Texas sun. All that was left was the haunting certainty that we will live through this again soon. 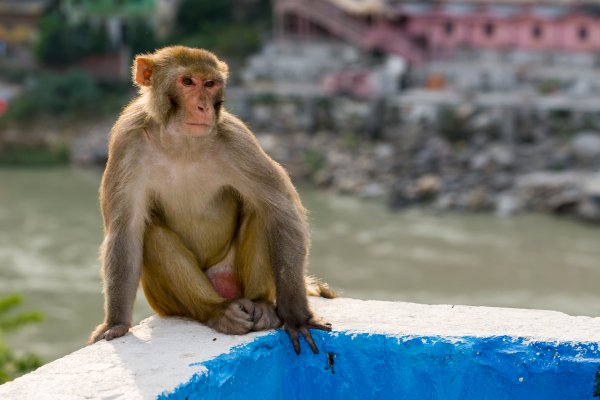 Monkey Captured After Escaping From Its Cage at San Antonio Airport
Next Up: Editor's Pick