Review: Solo Is an Uneven Star Wars Film. But It's Filled With Terrific Performances

With his slow-burning, honest-ma-it-wasn’t-me grin, Alden Ehrenreich, as the junior version of Han Solo in Solo: A Star Wars Story, looks more like the young Dennis Quaid than a sapling Harrison Ford. But no matter: He’s appealing anyway, and that’s key to any pleasure you might draw from Ron Howard’s wobbly foray into the Star Wars sidebar universe. The picture starts out slow, even though Howard and writers Jonathan Kasdan and Lawrence Kasdan try to goose it with a few aircraft battles. But it’s all too generic to mean much. Worse yet, the first two-thirds of the picture look dim and murky, as if it had been shot through a scrim of dust motes. Since these movies are so dependent on digital enhancement, it’s hard to know whom to blame for that: Cinematographer Bradford Young has shot some gorgeous-looking movies, like the somewhat naturalistic space-visitor picture Arrival. Maybe the whole thing is just an elaborate public-service announcement for glaucoma testing.

And to the degree that it matters, the plot is throwaway. We first meet young Solo on the squalid planet Correllia, a society of runaways and ne’er-do-wells. He’s got a girlfriend, Qi’ra (Emilia Clarke); he dreams of being a pilot. Desperate to escape his grungy surroundings—not that his environs improve much visually after he does so—he enlists with the Empire and goes to war, where he meets another grifter, Beckett (Woody Harrelson). The story involves the theft of a cache of coaxium, which is both starship fuel and fuel for a revolution. Like oil, it’s the sort of thing people fight over, and the villainous mogul Dryden Vos (Paul Bettany, with pinky-red tiger stripes on his face) wants the juice for himself.

Solo: A Star Wars story brightens up a little in the second half, both visually and in terms of plot momentum. And at the very least, you’ll find out how Solo and his future copilot and loyal sidekick Chewbacca (Joonas Suotamo), met. Hint: They’re stuck in a hole, and there’s mud. The hard truth about this just-OK Star Wars universe plug-in is that Howard simply may not be the best director of special-effects-heavy space operas. But that’s a dubious badge of distinction anyway. He has better luck with actors, and just about everyone does good work here: Clarke is vibrant and subtle, even in a cartoony role. And Donald Glover is a blast as Solo’s friendly nemesis—frenemis?—Lando Calrissian. Star Wars lore is woefully lacking in sex appeal—even Han Solo is more of a guy’s guy—but Glover has an unruly, charismatic elegance. He belongs in a better movie, but at least he perks this one up.

Glover also gets some of the best costumes, including a selection of capes a la Screamin’ Jay Hawkins. If nothing else, Solo: A Star Wars Story features some fabulous clothes, courtesy of costume designers David Crossman and Glyn Dillon. At one point Clarke’s Qi’ra shimmers into a room wearing a slinky black Halston-style gown with a decorative metal disco-choker attached, like something Bianca Jagger would have worn to Studio 54. It could never be as iconic as, say, Princess Leia’s snow-angel robe, but it’s a lot hipper, and it’s one of the things that saves this Star Wars story from total squaresville. 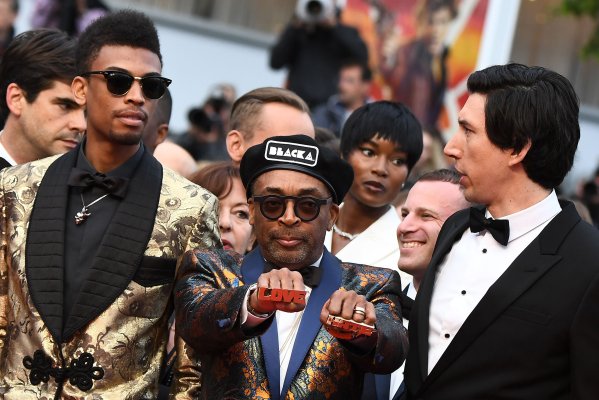 Cannes Review: Spike Lee's BlackKklansman Is the Movie We Need Now—And It's Funny, Too
Next Up: Editor's Pick