Princess Diana's Youngest Sister Is Giving a Reading at the Royal Wedding. What to Know About Lady Jane Fellowes

Prince Harry and Meghan Markle are making sure to incorporate Princess Diana on their wedding day. Diana’s older sister, Lady Jane Fellowes, is set to give a reading at the Royal Wedding ceremony on Saturday.

Fellowes is set to read from the Song of Solomon, according to the royal wedding order of service released before the wedding. Kensington Palace said in a statement before the wedding that Prince Harry was “keen to involve his mother’s family in his wedding.” Besides Lady Jane Fellowes, Diana’s other siblings, Lady Sarah McCorquodale and Earl Charles Spencer, are also set to attend the ceremony.

“Prince Harry and Ms. Markle both feel honoured that Lady Jane will be representing her family and helping to celebrate the memory of the late Princess on the wedding day,” Kensington Palace said in the statement.

After Princess Diana died in a car accident in Paris in August 1997, Lady Jane Fellowes and McCorquodale joined Prince Charles in bringing Diana’s coffin back to England from a Paris hospital. Fellowes read a Henry Van Dyke Jr. poem at Diana’s funeral.

Since Diana’s death, Fellowes has largely been absent from the spotlight, save for attending public memorial events. She has never been vocal publicly about her sister’s death, according to People.

But she has remained close to her two nephews. She attended the 2011 wedding of Prince William and Catherine, Duchess of Cambridge, as well as Prince Harry’s 2010 graduation from the Army Air Corps pilot course. The Duke and Duchess of Cambridge named Fellowes’ eldest daughter, Laura, as a godmother to Princess Charlotte.

Fellowes has ties to the Royal Family beyond her sister: she wed Robert Fellowes, who served as a private assistant to Queen Elizabeth II between 1990 and 1999, back in 1978. Diana, then 16, served as a bridesmaid. 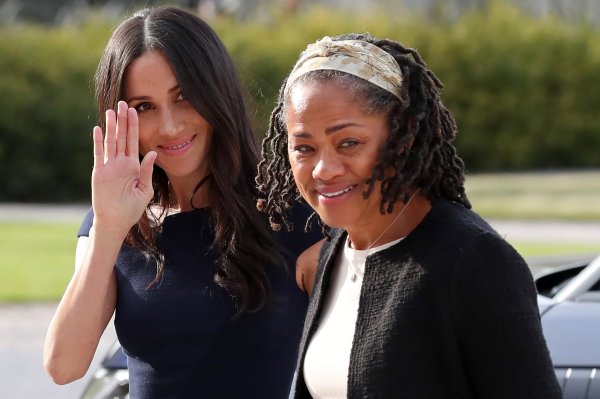 Meghan Markle Just Arrived at the Cliveden House Hotel for the Royal Wedding
Next Up: Editor's Pick