'This Is Your Time to Rise.' Oprah Tells Graduates to Fight for Truth and Hope in a World 'Off its Rocker'

Oprah Winfrey urged graduates to “be the truth,” and “take a stand for our right to have hope,” speaking at the commencement ceremony of the USC Annenberg School for Communication and Journalism on Friday.

“In about an hour and a half you’re going to be catapulted into a world that appears to have gone off its rocker,” Winfrey said, listing a series of problems: gun violence, climate change, systemic racism, media bias, economic inequality.

Oprah also offered graduates a path forward. “Here and now, I believe, you have to declare war on one of our most dangerous enemies, and that is cynicism,” she said. “Because when that little creature sinks its hooks into you, it’ll cloud your clarity, it’ll compromise your integrity, it’ll lower your standards, it’ll choke your empathy, and sooner or later, cynicism shatters your faith.”

Winfrey’s powerful speech at the Golden Globes in January set off speculation about her political aspirations and a potential presidential campaign. But she has said she has no such plans.

“I hesitate to say this because the rumors from my last big speech have finally died down, but here it is: Vote,” she said on Friday. “Pay attention to what the people who claim to represent you are doing and saying in your name and on your behalf.”

“If they go low — thank you, Michelle Obama — we go to the polls. People died for that right,” she said. “I think about it every time I cast a vote, so don’t let their sacrifice be in vain,”

Winfrey also left graduates with a list of simpler advice: eat a good breakfast, pay your bills, recycle, make your bed, aim high, say thank you, and put your phone away at the dinner table. 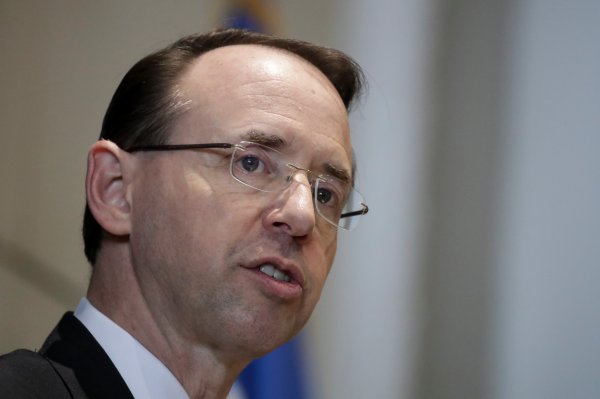 Rod Rosenstein Tells Law Graduates to Fall Back on ‘Your Own Moral Principles’ During Ethical Dilemmas
Next Up: Editor's Pick