The Most Over-the-Top Moments from Lifetime's Harry & Meghan: A Royal Romance

Courtesy of Lifetime
By Lena Grossman

On Sunday night, Lifetime aired Harry & Meghan: A Royal Romance, which portrayed a TV-movie account of Prince Harry and Meghan Markle‘s fairytale courtship before their royal wedding on May 19. While there are a plethora of television specials leading up to the wedding, Lifetime’s Harry & Meghan is one of the few premieres that features a more dramatized depiction of their relationship, rather than a documentary.

While it would be a tall order to strive for accuracy when it comes to the dialogue (Meghan: “What is it you do?” Harry: “I’m kind of the Prince of England.”), many moments were rooted in real-life instances. According to People, Meghan really did ask her friend who set her and Prince Harry up on the blind date if he was “nice.” Similarly, the story Meghan (played by Parisa Fitz-Henley) told Prince Harry (Murray Fraser) about her mom being called a “N—” is true. Meghan Markle wrote about the experience in an essay for Elle.

While the show put feminism, race and career front-and-center (“Glass ceilings, not glass slippers”), Lifetime did not disappoint in over-the-top moments. TIME zeroed in on some of the best.

Prince Harry vs. the Lion (twice)

In one of the first scenes, Prince Charles takes Princes William and Harry to Botswana after Princess Diana’s funeral in 1997. (Real) Prince Harry told Town & Country, “My dad told my brother and me to pack our bags—we were going to Africa to get away from it all.” In the Lifetime movie, Prince Harry cries under a lone tree when he looks up and makes eye contact with a fierce lion. Prince Charles appears at the ready to shoot the animal, but Harry jumps up and shoves his father’s gun away just in time to save the lion.

Later on in the movie, the lion appears once again. This time, Meghan is there. Harry tells Meghan that he believes this lion could really be his mother, Princess Diana.

In their (real) engagement interview, Prince Harry and Meghan confirmed their first date was “definitely a set up,” a crucial moment in the relationship that the Lifetime movie had a fun time adapting. In the film’s version of the events, the mutual friend who set them up, Violet von Westenholz, told Meghan this mystery man was “handsome, rich, well-connected and unlike his brother, has all his hair.”

On the night of the date, Prince Harry appears solemn before showing up forty (40!) minutes late, asking his bodyguard to come rescue him within a few minutes, per usual. “Give her a few minutes to tell her friends she got a prince, then come in,” Harry tells him. Upon arrival and Harry’s pleasant surprise that Meghan is a well-put together, strong woman, she explains how to use a watch and kicks him in the gut with the line, “I won’t accept compliments until you apologize for being forty minutes late.” The two talk literally all night and part ways as dawn breaks.

Yes, these two characters are not necessarily an over-the-top moment, but they sure had their fair share of interesting dialogue. For starters, the Internet had very vocal feelings about Prince William’s casting, played by Burgess Abernethy.

“Kate Middleton,” played by Laura Mitchell, continued to harp on the fact that she was a “commoner” throughout the film and told Meghan the two had to stick together. After what the film presents as a rocky start for future sisters-in-law Meghan and Kate, Kate opens up at Pippa Middleton’s wedding and says, “I feel like nothing but a baby machine. My greatest contribution to this country is my reproductive system.”

To put not-too-fine a point on the fact that Meghan is marrying a prince (“Who just happens to be charming”), the couple attends a Halloween party in Toronto where Harry dresses as a frog in order to be as incognito as possible. Meghan, who told Harry she one day hoped to be “the first biracial, female President of the United States” dressed as Hillary Clinton.

Harry takes off his frog hat and some Canadian guests start bullying him, saying things like “Your grandma can kiss my a—.” Other than the fact that Queen Elizabeth is on Canada’s currency (a point Prince Charles later makes), Meghan saves the day and reverses the roles on chivalry.

After news of their relationship broke, in November 2016 Prince Harry and Kensington Palace released a strongly-worded statement saying Meghan had been “subject to a wave of abuse and harassment” and Harry has been “deeply disappointed that he has not been able to protect her.”

In the movie, the statement comes as a surprise to Meghan. She and Harry get into a large fight where she says, “I am not some damsel in distress needing rescue from her Prince Charming…Fairy tales don’t exist.” She and Harry break up, but then Meghan’s mom reminds her that she does love Harry, Meghan rushes to the Santa Monica Airport and, after much back-and-forth, gets Prince Harry’s plane to stop right before takeoff. Love is in the air.

Prince Harry and Meghan’s trip to Botswana, the “proposal” and the real proposal

On another trip to Botswana, Prince Harry and Meghan lay in bed where he says to her, “I don’t need my life to be some picture royal picture. I just need you.”

Harry then proposes to Meghan in bed, which confused many viewers because, according to their engagement interview, Harry proposed while in their cottage “trying to roast a chicken.”

Back in the kitchen at Kensington Palace, Meghan roasts the chicken and Harry disappears then reappears on one knee and proposes, real engagement ring included.

According to royal protocol, Queen Elizabeth must sign an “Instrument of Consent” for Prince Harry’s marriage because of his place in line for the throne. In the Lifetime adaptation, Prince Harry and Meghan meet with the Queen and her corgis, who apparently took a huge liking to Meghan (this is also true in real life). While the Queen and the newly engaged couple talk, Queen Elizabeth asks, “Are you involved with that program The Crown?” When Meghan replies that she is not, the Queen jokes, “Good, then I won’t have to throw you in the Tower.”

Prince Harry and Meghan Markle tie the knot on May 19 at St. George’s Chapel in Windsor Castle. Coverage begins at 4:00 a.m. E.S.T. Here’s how to watch the wedding in every time zone. 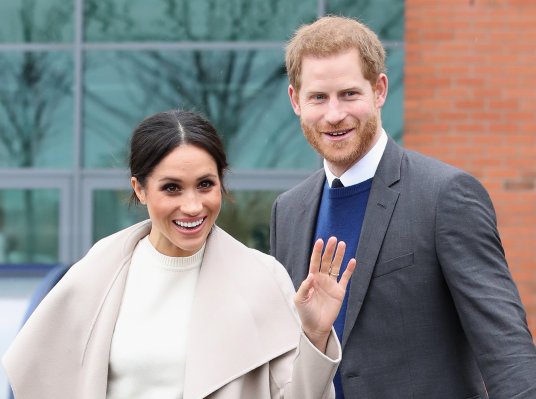