If you thought nothing could make you love Rihanna’s Met Gala outfit anymore than you already did, then think again.

It was obvious that Queen Rih absolutely crushed the night’s theme of Heavenly Bodies: Fashion and the Catholic Imagination with her full-on papal getup. But to top it all off, the 30-year-old fashion mogul apparently borrowed the mitre style hat that she paired with her jewel-encrusted Maison Margiela gown from a real cardinal.

In an interview with SiriusXM’s The Catholic Channel, Cardinal Timothy Dolan, the head of New York’s Roman Catholic diocese, revealed that he lent Rihanna a formal mitre for the occasion. “The news said she was wearing a tiara,” he said, noting that it was actually one of his hats. “She gave it back to me this morning…She was very gracious.”

Dolan went on to joke about what how Rih planned to repay him for his generosity.

“I was teasing my auxiliary bishops, who were teasing me about Rihanna and I said, ‘Hey, you guys should not complain because she’s volunteered to do some confirmations,'” he quipped. 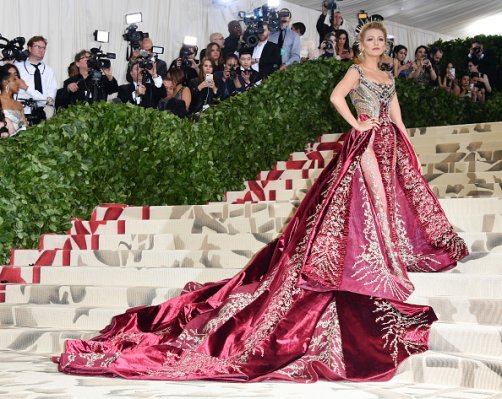 The Sneaky Way Blake Lively Paid Tribute to Ryan Reynolds With Her Met Gala Look
Next Up: Editor's Pick