At Monday night’s fashion Oscars, the 2018 Met Gala at the Metropolitan Museum of Art hosted by Anna Wintour, Rihanna, Donatella Versace and Amal Clooney, Mary-Kate and Ashley Olsen made one of their rare red carpet appearances.

The Olsen twins are no strangers to fashion, of course: they successfully pivoted from child stars sharing the role of the memorably adorable Michelle Tanner on Full House to reputed fashion designers with their lines The Row and Elizabeth and James. They’re also regulars at the Met Gala red carpet, appearing annually to spike interest in their whereabouts, especially because they remain generally outside of the celebrity spotlight for the rest of the year.

As usual, the internet is alight with interest in their outfit choices for the 2018 Met Gala, which — as is their wont — feature flowing, long gowns and flowing, long hair. (It works pretty well with the evening’s theme of “Heavenly Bodies: Fashion and the Catholic Imagination,” which lends itself to luxe robe-like vestments.) If in the internet’s response is to be believed, looks like we still can’t get enough of the actors we grew up with, and the idiosyncratic signature looks they’ve adopted over the years. 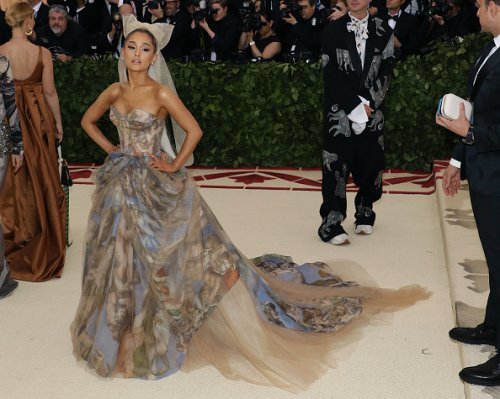 Ariana Grande Basically Wore the Sistine Chapel to the 2018 Met Gala
Next Up: Editor's Pick