Madonna's 2018 Met Gala Dress Is Just Like a Prayer

Leave it to Madonna to really commit to the Heavenly Bodies: Fashion and the Catholic Imagination theme of the 2018 Met Gala. The Material Girl, no stranger to a good religious sartorial moment, sported a regal black Jean Paul Gaultier gown, which she paired with a black net veil held in place by a crown of jeweled crosses, blonde plaits, and multiple rosaries.

Madonna’s Jean Paul Gaultier look not only paid homage to her role in popularizing religious iconography in fashion, but reunited her with her longtime fashion collaborator, Gaultier, the creative genius behind her infamous cone bra corset. Madonna, no stranger to controversy, has long been associated with religious elements, thanks to projects like her “Like a Prayer” video (which featured burning crosses and stigmata) and for making use of crucifixes as costume jewelry.

This isn’t the first time that Madge’s made a statement on the Met Gala red carpet; in 2016, the pop icon wore a sheer Givenchy look with cut-outs over her bust and derriére that left little to the imagination. 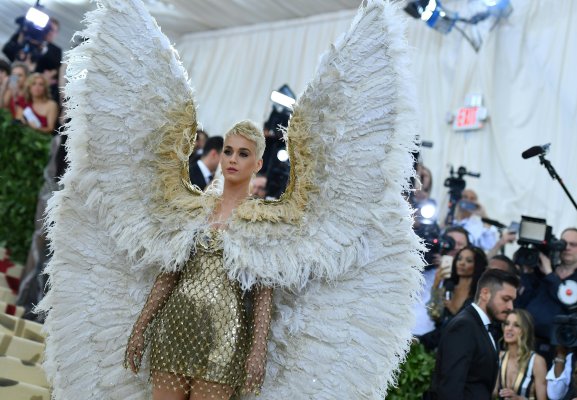 The Internet Takes Flight Upon Katy Perry's Giant Angel Wings at the 2018 Met Gala
Next Up: Editor's Pick