Why People Are Obsessed With the Royals, According to Psychologists

By now, you likely know that Prince William and Kate Middleton had their third child, Louis, who joins older siblings George and Charlotte. You likely also know that Prince Harry is set to marry American actor Meghan Markle. Perhaps you even know that the royal wedding will be held at St. George’s Chapel, and will include a lemon- and elderflower-flavored cake and a teenage cellist.

In short: The royals have infiltrated our collective consciousness. The question is, why?

“We’re social animals,” says Dr. Frank Farley, a professor and psychologist at Temple University and a former American Psychological Association president. “With famous media figures, people we learn about, celebrities, et cetera, we often live some of our lives through them.”

Farley says this falls under the label of “parasocial behavior,” which can create a one-sided relationship in which someone becomes attached to a person without actually interacting with them in any meaningful way. Parasocial behavior could include becoming emotionally invested in your favorite television show or sports team — or, say, in the lives and dramas of the royal family.

Celebrities, in particular, may capture this sort of attention because they illustrate the things we’ve been taught to covet, however subconsciously. “We all have dreams of wealth and fame and happiness and style and social influence and so on, which starts early with fairy tales and the way we raise our kids,” Farley says, adding that it plays into our deep-seated attraction to heroism. “That stays with us, to some extent, through our lives. Royals and other people, like Hollywood figures and Kardashian types, keep that phenomenon alive.”

Constant media exposure also creates a feedback loop. Because people are interested in celebrities, media outlets keep covering them. And because celebrities are constantly in the media, people take notice. The cycle repeats, over and over again.

“We live in a media-saturated time,” Farley says. “In a sense, there’s no escape. Some people will become interested in the details.”

While social media has likely only exacerbated this effect, the concept of celebrity worship is a long-standing one. Lynn McCutcheon, editor of the North American Journal of Psychology, began researching the phenomenon in 2001, and since then more than 50 studies have been dedicated to the topic.

In McCutcheon’s seminal paper on celebrity worship, published in 2002 by the British Journal of Psychology, he and his colleagues sorted fans into four categories, based on their responses to a 23-point Celebrity Attitude Scale. Those on the lowest end of the spectrum, according to the research, merely watched or read about celebrities on their own. Those in the first category of true celebrity worship turned the activity into a social pursuit, sharing and discussing it with others. This type of behavior is usually harmless, McCutcheon says, and “most of the people that we call celebrity worshippers never get beyond this.”

Some, however, cross into more concerning territory. In the second category, people may become obsessed with a particular person, or begin to believe that they’re soulmates or have a close, personal relationship. In the third category — which is both the rarest and most dangerous — they may even perform extreme behaviors such as stalking, McCutcheon says.

Certain traits may predispose people to higher levels of celebrity worship, including anxiety, general irresponsibility and difficulty forming close relationships, McCutcheon says. (Loneliness and lower intelligence may also be related, albeit to a lesser extent.) Evidence also suggests that gambling addicts are more likely to be celebrity worshippers, McCutcheon says.

The media also plays a part. “All the latest media have contributed to [celebrity worship],” McCutcheon says. “It makes it easier for people to feel like they are really attached to somebody, other than a mere parasocial attachment.”

But why have the royals, in particular, captured the eyes and hearts of the public — and why are Americans arguably more captivated than Brits?

The language and history shared by the U.S. and the U.K. is important. “The very fact that [the monarchy] has continued [in Britain] is a curiosity for us: That’s the royal family we got rid of, in a sense,” Farley says.

But unlike in Farley’s native Canada — a former British colony where monarchical influence is still present, if largely symbolic — Americans, who “threw the bums out a long time ago,” are able to look back on this history purely with curiosity, he says. “You can view it as entertainment, an interesting story we’ve got going here” — especially now, as Markle, a divorced American and a woman of color, marries into the British monarchy.

And even though Farley argues that the royals, by virtue of their inherited status, stand in opposition to self-made American values, he says there’s something alluring about following the lives of a family that makes it look easy.

“Life is hard, and becoming a success is difficult,” Farley says. “Look at these people: They inherited wealth, and social influence, and style, and fame, and they live this fairy tale life in castles — all the stuff that we grow up on.”

There’s nothing wrong with getting caught up in the details of a wedding you’ll never attend, or poring over pictures of the royal baby, McCutcheon says, so long as you keep perspective. 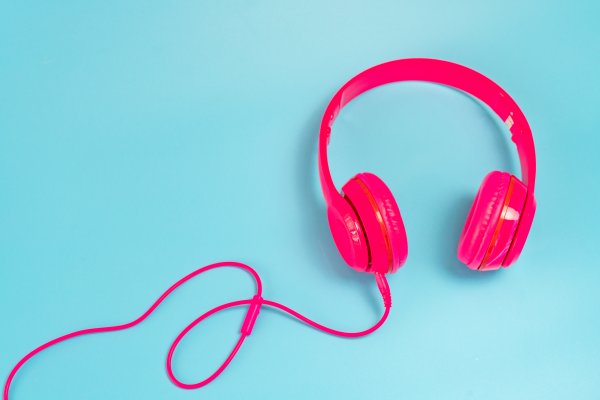 Listening to Music Has Surprising Health Benefits
Next Up: Editor's Pick