Meghan Markle‘s wedding dress has been a hot topic of discussion since the actress announced her engagement to Prince Harry last fall. With the royal wedding upon us, there’s still plenty of speculation about Markle’s wedding dress: what it will look like, what style she’ll go with, and of course, which designer she’ll choose for her big day.

Thankfully for Markle, however (who’s already proven that she has style fit for a princess on lock), there are plenty of royal ladies who’ve come before her whose iconic dresses can provide plenty of inspiration for all brides, even if they don’t have a title. From Grace Kelly, another actress who became a princess, to her soon-to-be sister-in-law, Kate Middleton, here are 25 gorgeous royal wedding dresses that Meghan Markle could draw inspiration from on her big day.

Queen Elizabeth wore a tulle, chiffon, and silk wedding gown designer by Norman Hartnell when she married Philip, the Duke of Edinburgh in 1947. Since the then-princess married only two years after the end of World War II, her wedding dress was made out of fabrics that she purchased using ration coupons that she had saved (she was also generously given 200 extra ration coupons for the occasion.) The dress’ design was inspired by a Botticelli painting and was embellished with 10,000 seed pearls, taking 350 women seven weeks to complete it. To top off her look for the big day, Elizabeth wore a matching veil, which was held in place by the Queen Mary’s Fringe Tiara, which was borrowed from her mother, the Queen Mother. On the day of the wedding, the silver, diamond, and gold tiara broke and was quickly repaired by a jeweler before Elizabeth headed to the ceremony; if you look closely, you can see a minor gap towards the center of the tiara because of the unexpected break.

Soraya Esfandiari Bakhtiari married Shah Mohammad Reza Pahlavi to become the Empress of Iran in 1951. She wore a custom wedding dress designed by Christian Dior clocked in at nearly 20 meters of white silk embroidered with gold and strass and weighed more than 30 kilograms. Soraya had been ill with typhoid the year before the wedding, leaving her weak; on the day of the ceremony, the Shah and one of his aides cut off 8 meters off the train of her dress to make it lighter, so that she would be able to stand during the ceremony.

In what many considered to be a real-life fairy tale of sorts, American movie star Grace Kelly married Prince Rainier III of Monaco in what was dubbed “the wedding of the century.” The wedding dress was designed by Metro-Goldwyn-Mayer’s costumer Helen Rose, as a parting gift from the studio to Kelly; Rose had worked on Kelly’s wardrobe for four of her films, according to the Philadelphia Museum of Art. The elegant gown was made of over 400 yards of fabric, including ivory faille taffeta and 100 yards of silk net, which was then embellished with antique Brussels lace and seed pearls. Kelly’s choices of accessories were refreshingly unconventional; she chose a circular veil so that the public could see her face more easily and opted for a matching, embellished Juliet cap instead of tiara to hold the veil in place. Finally, instead of carrying the traditional bouquet, she carried a prayer book that was embellished to match her dress and some lilies of the valley to accompany it.

Grace Kelly’s daughter, Princess Caroline, married French banker Philippe Junot in an ethereal gown by Marc Bohan for Christian Dior. The dress featured bell sleeves and dainty embellishments on the outer layer, which was sheer. Most memorable, however, might be Caroline’s decision to wear two buns on either side of her head a la Princess Leia, which she then accessorized with individual flower crowns to hold her veil in place in lieu of the traditional tiara.

Princess Diana’s wedding dress is one of the most iconic royal wedding dresses of all time. The voluminous gown was designed by then husband and wife duo David and Elizabeth Emanuel, who crafted it out of ivory silk taffeta and a piece of antique lace that had belonged to Queen Mary. Her 25-foot train was only surpassed by her 153 yard veil, which she held in place with her family heirloom, the Spencer tiara.

Queen Rania of Jordan, a known fashionista, tapped British fashion designer (and Princess Diana favorite) Bruce Oldfield to create the regal dress she wore to tie the knot with King Abdullah II bin Al-Hussein, who was a prince at the time. The white gown featured a suit-like over coat with short sleeves, exaggerated lapels, and an oversized belt, as well as gold embellishment. Rania opted to ditch a tiara in favor of a small embellished headband that fit around her large bun.

Marie-Chantal Miller became the Crown Princess of Greece when she married Pavlos, the country’s Crown Prince in 1995 and she did so in style, selecting a Valentino ivory silk gown that was embellished with embroidery and pearls. The dress featured a 4.5 meter Chantilly lace train, 12 different types of lace, took 4 months and 25 people to make, and reportedly cost a whopping $225,000.

To marry Queen Elizabeth’s youngest son, Prince Edward, Earl of Wessex, Sophie Rhys-Jones wore a a long-sleeved gown by British fashion designer Samantha Shaw that was embellished with 325,000 crystals and pearls. To hold her veil in place, Sophie wore a tiara from the Queen’s private collection, which she paired with a black and white pearl necklace and earrings that were designed by Prince Edward as a wedding gift.

When Crown Prince Haakon of Norway and Mette-Marit Tjessem Hoiby exchanged vows, the princess wore a white silk crepe gown with long sleeves that was designed by Norwegian wedding dress designer Ove Harder Finseth. She paired her wedding dress with a 20 foot veil held in place by a tiara.

Queen Letizia of Spain selected an elegant gown by couturier Manuel Pertegaz to marry King Felipe VI in 2004. The long-sleeved dress featured an open collar and a 14-foot train, as well as a matching veil which was held in place with a diamond tiara. The dress was embroidered on its hems, cuffs, and bodice with real gold.

Mary Donaldson married Crown Prince Frederik of Denmark in an ivory duchesse satin gown by Danish fashion designer Uffe Frank. The dress had a 19 ft. train and 3/4 length sleeves. The princess paired it with an antique lace veil that was once worn by Crown Princess Margareta of Sweden.

Marie Cavallier married Prince Joachim of Denmark in 2008 while wearing a feminine dress with a full skirt and a sweetheart neckline. Her wedding day ensemble was designed by Spanish-Italian fashion house Arasa Morelli and featured a lace bodice and matching veil.

Crown Princess Victoria of Sweden married her husband, Daniel Westling in a simple but beautiful gown with a rounded, off-the shoulder style bodice made by Swedish fashion designer Pär Engsheden.

Princess Tatiana of Greece and Denmark (2010)

Tatiana Blatnik married Prince Nikolaos of Greece and Denmark in an elegant gown designed by New York-based Venezuelan designer Angel Sanchez. The dress took 131 feet of French chantilly lace to make, which she accessorized with a matching bolero and a full-length veil held in place with a tiara borrowed from her mother-in-law, Queen Anne-Marie; the same tiara was also worn by Princess Marie-Chantal of Greece at her wedding.

To marry Prince William in 2011, Kate Middleton wore an elegant gown designed by designed by Sarah Burton at Alexander McQueen. The dress featured a relatively deep-v neckline, a 9-foot train, and lace overlay, as well as Victorian-inspired corsetry and padding on the hips to create the illusion of a more narrow waist. Kate secured her veil by borrowing the Queen’s Cartier halo tiara.

When former Olympic swimmer Princess Charlene married Prince Albert of Monaco, she chose an elegant Armani Privé duchesse silk gown that featured an elegant off-the-shoulder design and a train that clocked in at 5 meters. The dress was embellished with 40,000 Swarovski crystals and 20,000 mother-of-pearl teardrops, taking three seamstresses to make over the course of 2,500 hours. Charlene opted not to wear a tiara, choosing instead some diamond hair clips borrowed from Princess Caroline to hold her veil in place.

Claire Lademacher tied the knot with Prince Félix of Luxembourg while wearing an ivory silk dress embroidered with Chantilly floral lace and silver thread that was created by fashion designer Elie Saab. The dress featured a three meter long lace train, which was accentuated by her matching veil. Claire paired her veil with the Grand Ducal family’s diamond floral tiara and a set of diamond earrings that Princess Stephanie of Luxembourg and Grand Duchess Maria Teresa are believed to have worn on their wedding days.

When journalist Elisabetta Maria Rosboch von Wolkenstein married Prince Amedeo of Belgium to become Princess Elisabetta of Belgium, she wore a Valentino haute couture lace gown with a matching lace veil that was held in place by a diamond tiara. She completed the look with diamond and pearl earrings.

To marry Princess Caroline’s son Pierre Casiraghi, Beatrice Borromeo selected three dresses that she wore during their civil ceremony and two dresses by designer Giorgio Armani for the religious ceremony. The dress that she’s most well-known for wearing is the dress she wore to the wedding reception, a white, Grecian-style white silk tulle Armani gown.

Sofia Hellqvist married Prince Carl Philip of Sweden in a silk crepe and organza wedding dress that was designed by Swedish fashion designer Ida Sjöstedt. The gown featured three different tones of white, couture lace, and a train that was hand cut and hand stitched. Sofia paired the look with a hand-embroidered tulle veil that was held in place by an emerald and diamond tiara made for the occasion.

When Ekaterina Malysheva celebrated her marriage to Prince Ernst August of Hanover, she had not one, but three bespoke designs made for the occasion by Lebanese designer Sandra Mansour. Her main gown for the ceremony was a hand-embroidered Chantilly lace gown with a pearl overlay that took four months to create.

Lawyer and former model Alessandra de Osma married Prince Christian of Hanover in a high-necked and long-sleeved lace wedding gown designed by Spanish fashion designer Jorge Vazquéz in Lima, Peru. Alessandra paired her veil with the Hanover Floral tiara, which has a floral design and was previously worn by Princess Caroline of Monaco and Hanover and sister-in-law Ekaterina Malysheva. 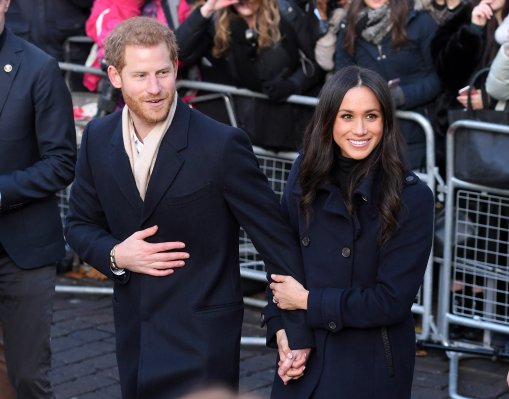 Why Meghan Markle and Prince Harry Hold Hands But Prince William and Kate Middleton Rarely Do
Next Up: Editor's Pick