Prince Harry and Meghan Markle arrive at the Royal Albert Hall to attend a star-studded concert to celebrate the Queen's 92nd birthday on April 21, 2018 in London, England. The Queen and members of the royal family are guests of honour at the celebration, which is being billed as The Queen's Birthday Party.
John Stillwell—WPA Pool/Getty Images
By Ashley Hoffman

Markle wore a navy Stella McCartney caped dress with matching navy suede heels by Manolo Blahnik and carried a clutch by Naeem Khan. Prince Harry wore a smart navy blue suit. The two stepped out together for this event a little more than a month out from the royal wedding on May 19.

Queen Elizabeth, who turned 92 on Saturday, wore gold to her celebration at Royal Albert Hall.

The event was attended by most of the royal family — with one exception being Kate Middleton, the Duchess of Cambridge, who is expecting her third child on Monday — and members of the public who could snag a ticket. (For those who couldn’t, the concert was broadcast live on BBC One and BBC Radio 2.)

The event concluded with Queen Elizabeth acknowledging the crowd with a wave, but not before she gave a coy smile (and maybe an eye roll?) during a speech made by her son Prince Charles after he addressed her as “Your Majesty” and then “Mummy.” 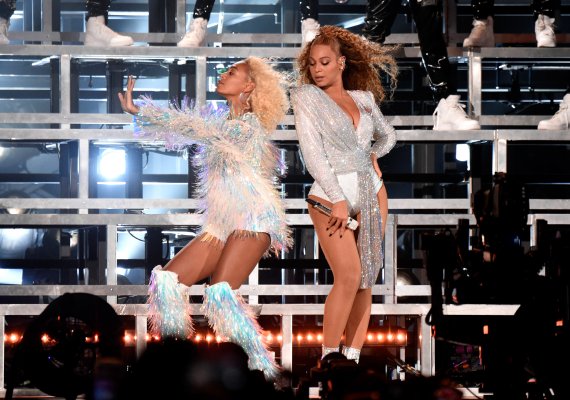 The Internet Can't Handle Beyoncé and Solange Falling Onstage at Beychella
Next Up: Editor's Pick