The Top 10 Most Han Solo Moments in Star Wars History

With Star Wars day right around the corner and the release of Solo: A Star Wars Story fast approaching, May is shaping up to be quite a month for galaxy far, far away fans.

After greeting fellow Star Wars enthusiasts with the pun-fueled maxim “May the fourth be with you” on Friday, fans can continue the celebration by gearing up for the forthcoming Han Solo standalone movie to hit theaters on May 25.

Reportedly set around 10 years prior to the events of 1977’s Star Wars: A New Hope, Solo will follow a young Han (Alden Ehrenreich) and Chewie (Joonas Suotamo) as they embark on an action-packed adventure with both old and new galaxy far, far away faces — including Donald Glover’s Lando Calrissian and Emilia Clarke’s Qi’Ra. There’s even talk that we’ll get to see the card game in which Han won the Millennium Falcon from Lando, as well as Han’s infamous Kessel Run.

But before we learn anything new about the early life of everyone’s favorite snarky space smuggler, let’s revisit some of the best Han moments from the original trilogy and beyond.

Here are the top 10 most Han Solo moments in Star Wars history.

10. “I have a really bad feeling about this”

As the Ewoks prepare to turn Han, Luke and Chewy into a feast to honor their newly discovered “god”, C-3PO, a trussed-up Han supplies a one-liner that perfectly encapsulates the precarious situation.

Both a callback to one of the most famous—and oft-repeated—phrases in the Star Wars saga and an aptly on-the-nose take on the group’s predicament, “I have a really bad feeling about this,” is classic Han.

Although Han puts on a front at times, his commitment to protecting those he cares about is arguably his most endearing quality. So when Luke goes missing in action on planet Hoth in The Empire Strikes Back, it’s no surprise that Han is willing to risk his own life to try to find him in the encroaching snow storm.

Of course, the rescue mission still plays out in typical Solo style, with Han using a method that’s anything but conventional—warming Luke up inside the body of a tauntaun—to save his barely conscious friend.

After hilariously faking his way through an exchange with Imperial guards over the Death Star’s communications system, Han quickly abandons his attempt to give Luke more time to find Leia as soon as he realizes the jig is up. The result is one of A New Hope‘s most enjoyable sequences—the smooth-talking Han shooting the intercom before cracking a joke about the whole ordeal.

Despite C-3PO’s claim that the odds of successfully navigating the Millennium Falcon through the asteroid field outside of Hoth are 3,720 to one, Han’s tried-and-true piloting skills are once again able to get the Rebel crew out of an extremely tight spot.

Relying on sheer confidence and luck alone, Han is able to make that .00003 percent chance a reality—a true galaxy far, far away legend.

Han may start the original trilogy off as a firm non-believer in the Force, but by the time The Force Awakens rolls around, he’s spent enough years hanging out with Jedi to have a pretty strong understanding of their powers.

So when Finn suggests that they simply use the Force to disable Starkiller Base’s shields, it’s more than gratifying to hear Han shoot him down with the scathing rebuke, “That’s not how the Force works!”

As Luke pulls out all the stops to protect his friends from Jabba and his lackeys in Return of the Jedi, a still-blind-from-hibernation-sickness Han manages to take out the battle’s biggest threat purely by chance. While flailing around looking for Boba Fett, Han accidentally backs into the bounty hunter and sends him flying into the waiting mouth of the sarlacc.

Although the jury’s still out on whether Boba Fett is actually dead, luck always seems to be on the side of Solo.

Ah, the glorious moment when Han and Chewie board the Millennium Falcon for the first time in over 30 years. Getting to witness Harrison Ford and Peter Mayhew reprise their roles as everyone’s favorite smuggler-wookiee duo in The Force Awakens is the type of movie experience that doesn’t come around often and needs to be treasured accordingly.

The look on Han’s face as he takes in his beloved ship says it all.

Shortly after we first meet Han in the Mos Eisley Cantina on Tatooine, a disagreement with a certain bounty hunter by the name of Greedo leads to one of the most famous—and controversial—Star Wars scenes of all time.

Basically, Greedo demands Han pay Jabba the money he owes him for a botched smuggling job, a short gun fight ensues and Han walks away from the scene of the crime unscathed. No matter who actually shot first, Han’s quip of, “Sorry about the mess,” as he strolls out of the bar is the quintessential introduction to his swagger.

Despite his claim that he was only helping the Rebels for the reward money, when the going gets tough in A New Hope, it’s Han who shows up to save the day.

Just when it seems like Luke’s mission to destroy the death star is doomed, Han appears out of nowhere in the Millennium Falcon to throw Darth Vader and his squadron of TIE fighters for a loop. The cynical smuggler has transformed into a true hero.

Moments before Han is lowered into the carbonate chamber to be put into hibernation in Empire, Princess Leia finally admits what fans long suspected. “I love you,” she tells him, a resolute look on her face. However, instead of receiving a similar assurance in return, she gets only a cocky, “I know.”

This scene is made all the better by the fact that Harrison Ford reportedly improvised this comeback after deciding that the line in the script—”I love you, too”— didn’t square with Han’s vibe. 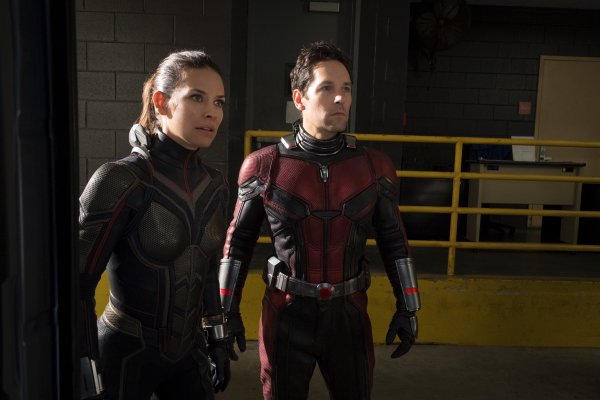 Marvel's Ant-Man and the Wasp Trailer Sees Paul Rudd Team Up With Evangeline Lilly
Next Up: Editor's Pick