Analyzing Every Tiara Meghan Markle Could Wear at the Royal Wedding

Not every bride has a royal wedding.

And not every woman wears a crown on her big day. But while Meghan Markle may be just a commoner like the rest of us right now, royal tradition suggests that she will wear a sparkling diamond tiara for her May 19 marriage to Prince Harry at Windsor Castle. The question, then: which tiara will she choose to top off her wedding look? The royal family has quite a collection of diadems at their disposal, many delicate pieces dating back decades — if not a century or more — and carrying the weight of tradition in their cold, hard, priceless diamond hearts. Yet rarely do tiaras see the light of day: they are only brought out for certain state occasions and weddings, like that of Kate Middleton to then-fiancé Prince William back at the royal wedding in 2011.

Assuming that Markle follows in Middleton’s footsteps, here’s our rundown of Markle’s headwear options, based on what’s available to her in the royal vault.

Princess Diana, Princess of Wales, in November 1986 during a visit of Bahrain.
Anwar Hussein—WireImage

The Spencer Tiara is actually owned by Princess Diana’s family, the Spencers, not the royal family. It was a favorite of the late Princess Di, with its romantic curlicue design of diamond “tulips,” stars and scrolls crafted from a few other pieces of jewelry combined into this tiara form — in fact, Diana wore it on her own wedding day to Prince Charles back in 1981, giving it some extra symbolism. (Her sisters also donned it for their nuptials.) It was last known to be in the possession of Diana’s father, the Earl of Spencer, and has not been worn since Princess Diana’s death in 1997, although it has appeared publicly as part of exhibitions and could potentially be loaned out for Markle.

The Cambridge Lover’s Knot Tiara is one of the most dramatic of the options in the royal arsenal, with its memorable Art Deco curlicues and height. It has an illustrious history: crafted by court jewelers Garrard in the early 1900s for Queen Mary, its design is based on a centuries-old Gothic Revival tiara first owned by Princess Augusta of Hesse. That piece is in a separate private collection, but this replica is now in the possession of the Queen, who has loaned it to both Diana and Kate over the years after wearing it herself earlier in her own reign. It consists of a mix of upright pearl drops and diamond arches, some of the pieces borrowed from other tiaras. The Duchess of Cambridge wore it as recently as 2017 at Buckingham Palace, and it was a favorite of Princess Diana’s for formal occasions. But many believe that Markle may not go this route, because it is so flashy.

The ornate Lotus Flower Tiara was also designed by Garrard London in the 1920s of pearls and diamonds. It was a reworked wedding gift for the Queen Mother, who had a necklace dismantled and rearranged into this tiara form. She then passed it down to her daughter Princess Margaret, who wore it often and lent it to her daughter-in-law for her own wedding before it returned to the royal family vault, presumably around the time of her death in 2002. More recently, the Duchess of Cambridge has put it on display for occasions of state, including a 2013 ball and a visit from Chinese President Xi Jinping in 2015 for a Buckingham Palace banquet. It’s distinguished by the delicate lotus-shaped floral motif that makes up its signature curvy shape, making it a light but regal piece.

The elaborate Strathmore Rose Tiara dates back to 1923, according to royal jewelry experts. It was originally a gift from the 14th Earl of Strathmore to his daughter Elizabeth upon the occasion of her marriage; she ultimately became Queen Mother, as her husband was crowned King George VI following their marriage. Since then, it has been worn sparingly by the royal family. But it is striking in design, featuring rose “prongs” set with rose-cut diamonds.

The Queen Mother’s Cartier Bandeau Tiara is actually comprised of a set of bracelets, some of them also fitted with rubies, emeralds, and sapphires; for the tiara, the wearer chooses three pieces, according to Town & Country. The current Queen has been known to wear some of the different bracelet components individually over the years. It would be an unusual choice for Markle, but also a sleeker option than some of the more fanciful tiaras floating around the royal vault.

If Meghan Markle is looking to make a bold statement, Queen Mary’s Fringe Tiara is bound to stand out: it features a stately series of vertical rows of diamonds. Originally owned by Queen Mary according to the Royal Collection website, she lent it to her daughter-in-law Elizabeth for her wedding day. It was crafted from a diamond necklace that Queen Victoria gave to Queen Mary for her wedding back in 1893. It remains contemporary in design: minimalist in structure, maximalist in sparkle.

Out of the running: The Cartier Halo Scroll Tiara

This is the one tiara we know Meghan Markle won’t be wearing on her walk down the St. George’s Chapel aisle. The Cartier Halo Scroll Tiara, referred to as the Halo Tiara, was donned by Kate Middleton for her 2011 nuptials to Prince William at Westminster Abbey. It was a gift from the Queen Mother to Queen Elizabeth II on the occasion of her 18th birthday. But it will not be within Markle’s reach for her spring wedding, as the Queen has loaned it out to the National Gallery of Australia for a Cartier jewelry exhibition on display from March 30 through July 22.

Of course, it’s also entirely possible that Markle will choose one of the lesser-known sparklers from the extensive royal jewelry vault, transform a different piece as recent Queens have been wont to do, or even show up with a new tiara altogether. We’ll find out on May 19. 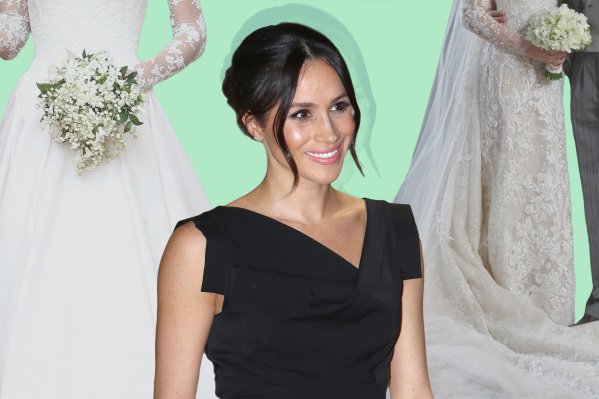 25 Classic Royal Wedding Dresses That Could Inspire Meghan Markle
Next Up: Editor's Pick