Mike Myers Returns as Dr. Evil and Says He Was Just Fired From the Trump Administration

Mike Myers reprised his role as the infamous “Austin Powers” villain, Dr. Evil, and revealed what he’s been up to. Apparently, he finagled his knack for evil into a politics career as an employee of the Trump Administration. Unfortunately, he was just fired.

Last night on The Tonight Show with Jimmy Fallon, Dr. Evil made an entrance like only the most villainous villains can: via the chair swivel on a large projector screen.

After Dr. Evil gets properly situated – pinky finger to the corner of his mouth – he begins to discuss his recent loss of employment on the Trump team with Fallon.

Once Steve Bannon beat him out for “Secretary of Evil,” Dr. Evil says he became more of an “ideas guy” for the Trump Administration, suggesting things like a moat full of “spiky blow fish” instead of a border wall between Mexico and the U.S., and he wanted Alec Baldwin to pay for it.

He did draw one line, even though he claimed all the “most evil ideas” belonged to him. When Fallon asked if he came up with the idea of deporting Dreamers, Myer’s character replied, “No, Jimmy, even I have my limits. I’m evil, but I’m not a monster.”

Not exactly the social butterfly, Dr. Evil did find an office BFF in Ben Carson, but he wasn’t so close with Donal Trump Jr. because, in his words, “Don Jr.? Well, that guy’s creepy AF. He looks like he’s missing a facial feature, you just don’t know which one.”

The only noticeable element missing from the revival is Dr. Evil’s hairless cat Mr. Bigglesworth, but maybe the little guy will make a public appearance as his owner ramps up his own political career.

See the rest of Jimmy Fallon and Dr. Evil’s conversation, including a major political announcement by Myer’s character, above. 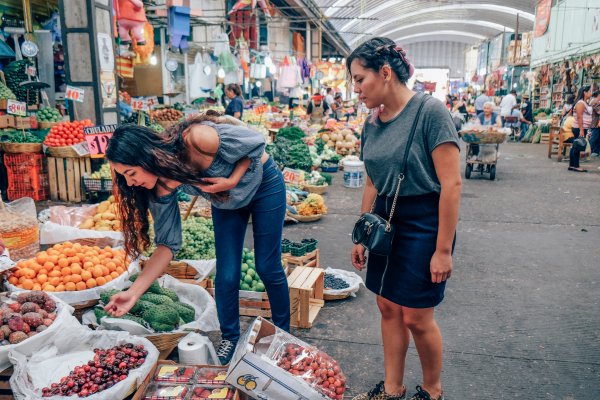 This Company Wants You to Travel the World as a Professional ‘Flavor Finder'
Next Up: Editor's Pick