Actor and director John Krasinski is riding a high from the positive reviews of his new horror film A Quiet Place. But leave it to a London customs agent to keep his ego in check.

During a visit to Jimmy Fallon‘s Tonight Show, Fallon casually asked Krasinski about his wife, fellow actress Emily Blunt. Based on the audience’s warm applause, Krasinski admitted he knew he had “married up.”

“They don’t have to tell me, the customs agent in London did,” he joked. He had been visiting Blunt regularly in London while she was shooting the remake of Mary Poppins, in which she plays the titular character. But at one point he ran into a bit of a snag in the customs line.

“I hit this guy, he’s about my age, he looked like he was about to get a little surly with me,” Krasinski recalled for Fallon. The agent definitely did not recognize Krasinski, and the first strike was that Krasinski had to explain that he was an actor in a remake of the British Office TV show. But when he shared who he was visiting, the agent definitely had some knowledge of the star’s wife.

“Her name’s Emily Blunt,” Krasinski explained. “And he goes, you? You? You married Emily Blunt? Ok, go. Go. The stamp was so hard.”

Watch Krasinski retell the story of his brush with British customs above. 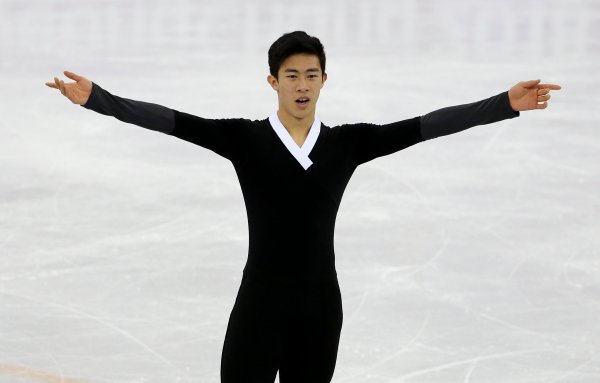 Olympic Champion Nathan Chen Will Be Heading to Yale
Next Up: Editor's Pick