Emma González — the Marjory Stoneman Douglas High School student who has become known for loudly and passionately “calling BS” — got onstage at the March for Our Lives on Saturday and stood silent for more than four minutes.

“In a little over six minutes, 17 of our friends were taken from us, 15 more were injured, and everyone — absolutely everyone in the Douglas community — was forever altered,” González said, beginning her speech at the Washington, D.C. march. “Everyone who was there understands. Everyone who has been touched by the cold grip of gun violence understands. For us, long, tearful, chaotic hours in the scorching afternoon sun were spent not knowing. No one understood the extent of what had happened. No one could believe that there were bodies in that building waiting to be identified for over a day. No one knew that the people who were missing had stopped breathing long before any of us had even known that a code red had been called. No one could comprehend the devastating aftermath, or how far this would reach, or where this would go.”

González, one of the leaders of the #NeverAgain movement, spoke for less than two minutes and then suddenly fell silent, marking the length of time it took for a gunman to kill 17 people in a rampage at her high school last month.

She stared straight ahead, breathing deeply while tears streamed down her face. At times, the crowd of thousands cheered her name and chanted, “Never again,” while she held a powerful silence at the podium for more than four minutes, until a timer beeped.

“Since the time that I came out here, it has been six minutes and 20 seconds,” she said, breaking her silence. “The shooter has ceased shooting and will soon abandon his rifle, blend in with the students as they escape, and walk free for an hour before arrest. Fight for your lives before it’s someone else’s job.”

Hundreds of thousands of students participated in the March for Our Lives in Washington, D.C. and in sibling rallies around the country on Saturday, calling for action to end gun violence. 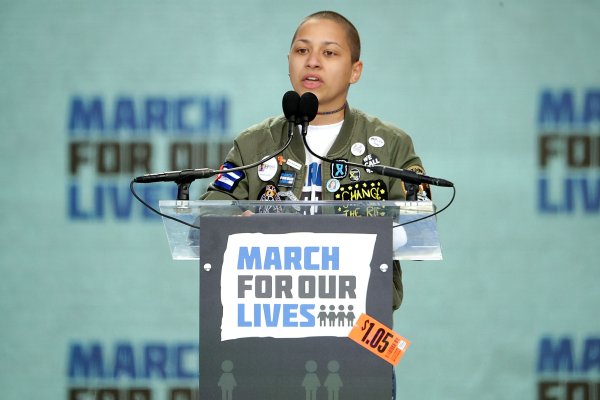 Hundreds of Thousands March for Gun Control
Next Up: Editor's Pick