H.R. McMaster Worked for Me. His Retirement From the Military Reveals A Lot About President Trump

H.R. McMaster, national security advisor, listens as U.S. President Donald Trump, not pictured, speaks during a meeting with North Korean defectors in the Oval Office of the White House in Washington, Feb. 2, 2018.
Zach Gibson—Bloomberg/Getty Images
Ideas
By James Stavridis
Admiral Stavridis (Ret.) was the 16th Supreme Allied Commander at NATO and is an Operating Executive at The Carlyle Group. His new book is 2034: A Novel of the Next World War. His previous nonfiction book was Sailing True North: Ten Admirals and the Voyage of Character

I met Colonel H.R. McMaster in 2004, when he was in command of the Third Calvary Regiment in Tal Afar, Iraq. It was a hot and dusty day, and I was a three-star Vice Admiral traveling with my boss at the time, Secretary of Defense Don Rumsfeld. McMaster, who looks like he ought to be working as a bouncer in a city bar in the Badlands neighborhood of his Philadelphia hometown, briefed us on his work in pacifying the violent region with an adept blend of hard and soft power — what some have called “smart power.”

That is one smart Colonel is what I thought, and it solidified in my mind the superb intellect combined with operational skills that have characterized his career. Barrel-chested, shaven head and direct of manner, he radiates both brains and brawn. As the NATO Commander a few years later, and wearing four stars, I requested his assignment to my Afghan command as a one-star to take on the dark heart of our challenges there: corruption in the Afghani government. He did hard work in a difficult place there, and my respect for him grew.

McMaster’s 1997 book, Dereliction of Duty, is in many ways a stinging indictment of the Washington culture of subtle deceit, hidden agenda and back-stabbing that helped pull the U.S. into a quagmire in Vietnam. It tells the story of the malfeasance of the uniformed senior military in misleading the nation and the President about the true state of affairs as the war spiraled down to defeat. It is also a cautionary tale for McMaster himself. In his time in the White House, he tried to rise above what Rex Tillerson called in an outburst of candor (and an understatement, frankly) this “mean-spirited town.” McMaster’s short tenure as President Donald Trump’s National Security Advisor certainly reinforced that assessment.

The media accounts of his relationship with the President are largely true. McMaster is a good judge of character and certainly knew what he was getting into when the President tapped him as his second National Security Advisor. When we get an assignment in the military, we call them “orders,” and this was a set of orders he would gladly have passed on. But like a good soldier, he shouldered the pack and stepped into the White House to do what he could to create at least part of a guardrail system around this mercurial and unstable President.

From the beginning, he knew he would deal with whipsaw views on the key elements of foreign policy, like watching North Korea policy lurching from “fire and fury” one minute to accepting a meeting with Kim Jong Un to cut a big, beautiful deal the next. No National Security Advisor could bring order out of the policy chaos any more than his fellow General John Kelly could bring order to the process chaos. This is a President who loves and revels in chaos. For a national security team, that gives birth to the worst quality of all from an international and especially an allied perspective: inconsistency. Trump has famously said he doesn’t want our enemies to know what we are thinking; the problem is, neither do our friends nor even, it seems at times, do we ourselves.

McMaster worked hard to bring talent to the National Security Council staff, avoid turf battles and generate a coherent National Security Strategy. When the strategy came out, I chatted with McMaster about it, and he said, “America First doesn’t have to mean America Alone.” He managed to make the document shockingly normal. While dropping out of the Trans-Pacific Partnership and the Paris climate accord were battles he could not win, he managed to at least keep a sense of mainstream foreign policy choices in play: a strong NATO, Asian alliances, countering a resurgent Russia and a rising China, a focus on cyber and energy, and other reasonable positions.

But by the end of a year, both the pace and above all the bureaucratic stresses in the White House were beginning to show. Over time, the insulation started to come off his wires; disagreements with cabinet departments started to undermine his position. He began to receive less support from the Pentagon and the Chief of Staff in the White House, and his solid, thoughtful and measured personality naturally grated on the boss. The rumors of his dismissal have been circulating seriously for months. The fact that he has chosen retirement instead of moving on to a fourth star speaks volumes about how this journey has concluded.

Going forward, I suspect and hope we will see more of H.R. McMaster. His intellect and depth of experience will be valuable assets for the private sector, and hopefully he will eventually return to government in an administration more in line with both his sensible, centrist views and, perhaps more importantly, with his rational personality. In shifting to John Bolton, we go from a centrist to a neo-con; from a calming personality who builds teams to a harsh ideologue who drives them into the ground; and from a practitioner of smart power to a theorist of hard power. The drums of war are beating louder, and in the Pentagon they are taking a deep breath and preparing for conflict not only on the banks of the Potomac in the interagency but also, more dangerously, around the world. We are poorer for the departure of H.R. McMaster. He deserved a better ending to his short, strange voyage. 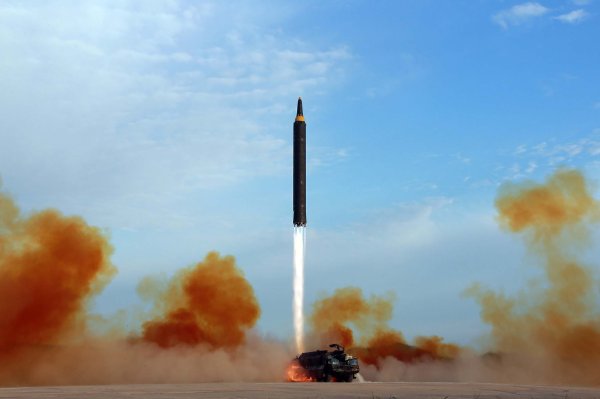 This Is What You Should Do During a Nuclear Alert
Next Up: Editor's Pick