Prince William and Catherine, Duchess of Cambridge welcomed the newest addition to the Royal Family on Monday. Now, Will and Kate Middleton have announced what the baby boy’s name is.

The royal baby name is Louis Arthur Charles, Kensington Palace announced on Twitter Friday. His royal title will be His Royal Highness Prince Louis of Cambridge.

While the royal baby name odds on Louis were 33/1 could make it appear to be a surprising choice, the names Louis, Arthur and Charles have significance within the royal family. Louis was the name of Prince Phillip’s grandfather, Prince Louis Alexander of Battenberg, as well as Prince Charles’ great-uncle Earl Louis Mountbatten, who was assassinated by the IRA in 1979. Louis is also a middle name for both Prince William and Prince George.

The Duke and Duchess of Cambridge and their newborn son.
Kirsty O'Connor - PA Images—PA Images via Getty Images

As for Prince Louis’ middle names, Arthur was a middle name of Queen Elizabeth’s late father King George VI and is a middle name to both William and Prince Charles. Arthur of course also brings to mind King Arthur (though experts say there’s no evidence of any actual historical king behind the famous Arthurian legends).

Louis Arthur Charles is the third child for the Duke and Duchess of Cambridge, who welcomed a son, Prince George, in 2013 and a daughter, Princess Charlotte, in 2015.

Ahead of Louis Arthur Charles’s birth, the couple announced via the official Kensington Palace Twitter account that Middleton was expecting in September 2017, but opted not to reveal the baby’s gender (something they had done with their previous two children) ahead of the birth.

The baby’s birth is just one of a series of exciting life events for the royal family this spring, as Prince Harry and Meghan Markle will be getting married next month on May 19th. 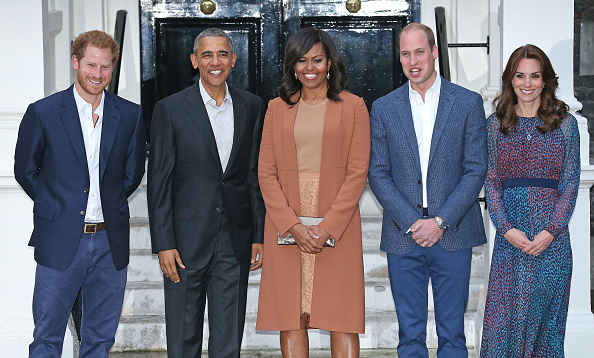 The Obamas Are Already Planning a Pajama Party With the New Royal Baby
Next Up: Editor's Pick