Kate Middleton Welcomes a Baby Boy: The Latest on Royal Baby No. 3

It’s finally time. After much anticipation, Catherine, Duchess of Cambridge, has welcomed a baby boy on Monday, just hours after she was admitted to the hospital in labor with royal baby number three with her husband Prince William, the Duke of Cambridge.

Kate Middleton gave birth to a son weighing 8 pounds, 7 ounces, Kensington Palace announced Monday. “The Queen, The Duke of Edinburgh, The Prince of Wales, The Duchess of Cornwall, Prince Harry and members of both families have been informed and are delighted with the news,” the Palace said in a tweet.

Prince William left St. Mary’s Hospital in a black vehicle at around 4.15 p.m. U.K. time (11.15 a.m. E.T.) to see Prince George and Princess Charlotte at Kensington Palace. The new dad was all smiles as he was snapped outside the hospital, and told well-wishers that he’d be “back in a minute.” The Duke of Cambridge is expected to return with Prince George and Princess Charlotte in tow.

Kensington Palace announced on Twitter Monday morning that Kate Middleton was in the early stages of labor with her third royal baby.

The news of the baby’s birth was also announced by an unofficial town crier on the steps of St. Mary’s Hospital’s Lindo Wing, where Middleton was admitted. “Buckingham Palace proudly announces the birth of a newly born Prince on this St. George’s Day 2018,” he shouted. “God save the Queen!”

A crowd gathered outside of the Lindo Wing on Monday, in eager anticipation of the royal baby’s birth. Some royal super-fans had been sleeping outside the hospital the last couple of weeks in anticipation of the birth, including one 83-year-old fan who slept on a bench in a head-to-toe Union Jack outfit.

An ordinary couple looked bemused when they left the hospital with their newborn to find the world’s media waiting. “Unsuspecting couple have new baby – and find the world’s press waiting outside,” ABC News’s James Longman wrote on Twitter, alongside a photo of the baffled pair.

Middleton first announced her pregnancy back in September 2017, with an expected due date sometime in April. This newest addition to Prince William and Middleton’s royal family follows Princess Charlotte, born May 2, 2015, and Prince George, future heir to the throne, born July 22, 2013.

Early on in her pregnancy, Middleton suffered from Hyperemesis Gravidarum, which she also experienced in her first two pregnancies. But in the last few months, Middleton has been very much on-the-go, sometimes appearing at multiple public events per day from charity visits to awards shows red carpets. Middleton and Prince William have remained tight-lipped on their new child’s expected gender so far, and there’s also been plenty of speculation and betting on the royal baby name selection; we’ll just have to wait for Kensington Palace’s official announcements on both fronts.

For both Prince George and Princess Charlotte, Middleton gave birth in the private Lindo Wing of St. Mary’s Hospital in London, and appeared with her newborns on that hospital’s front steps soon after the births.

That’s the plan once more this time around, with the hospital wing sealed off weeks in advance in preparation for the royal baby’s arrival.

The traditional birth announcement bulletin was framed and placed on a golden easel outside the palace. 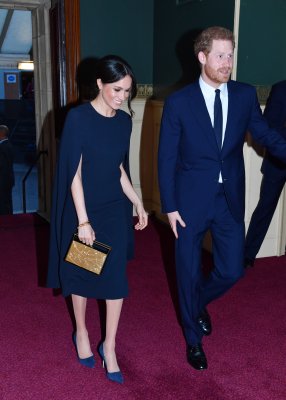 People Thought Prince Harry and Meghan Markle Were Ridiculously Cute in Matching Outfits for the Queen's Birthday
Next Up: Editor's Pick