DJ Khaled dropped a surprise new track, “Top Off,” from his upcoming album, Father of Asahd, early on Friday morning.

It’s a song that’s destined to be a hit thanks to the star power of its features: rapper Future, Beyoncé, and her husband Jay Z — and in news that will surprise absolutely no one, Queen Bey is the undisputed clear star of the track. Although Bey graciously shares the song with two of hip hop’s favorite rappers, when she begins to drop bars, the game is basically over — confirming that Beyoncé Giselle Knowles-Carter is not only the queen of our hearts (and maybe everything) but also that she’s your favorite rapper’s favorite rapper.

While the Internet was thrilled by Bey’s dexterous rapping skills, their excitement over the new song was only rivaled by the interest they had in the possible subtext possibly aimed at Kim Kardashian West, Drake, and Tiffany Haddish in some of Beyoncé’s verses.

As reported by Vulture, Beyoncé makes good use of her opening lines to possibly take shots at Drake. After first declaring that she’s the only lady on the track and also the realest, Beyoncé gets to work with lines like: “I break the internet, top two and I ain’t number two,” she growls. She could be addressing Drake’s braggadocio on his song “Gyalchester,” where he claims, “I know I said top five, but I’m top two, And I’m not two and I got one.” Drake, no stranger to being put in his place, is a noted member of the Bey Hive, so it’s highly possible that any lyrical nod from Beyoncé would actually delight his heart and soul.

She doesn’t name anyone explicitly, which makes this dig two-fold when you take into consideration that Beyoncé says “I break the internet,” a possible reference to Kim Kardashian West’s notorious “Break the Interent” Paper Magazine cover, which has made the phrase practically synonymous with the reality tv celebutante. Take note, Kim K — Beyoncé is top two and she’s definitely not number two.

Tiffany Haddish, whose gregarious exuberance and recent ascent to fame has made her a joy on the talk show circuit, recently shared a couple Beyoncé anecdotes with the kind of candor that is usually not seen by those who want to remain close to the queen. But this is a life decision that Haddish seems to believe merited a gentle warning from Beyoncé in “Top Off,” who cautions that “if they’re tryna party with the queen,they gon’ have to sign a nondisclosure.”

It’s totally possible that Beyoncé was just being general. But whether Beyonce intended to aim this at any one person or not, Haddish took to her Twitter to pay her respects to the queen.

The moral of the story? Always listen to Beyoncé.

Listen to “Top Off” below. 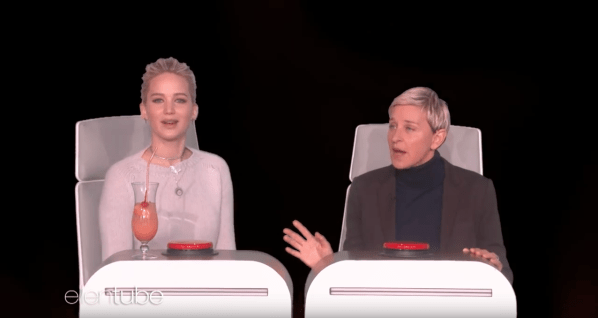 Jennifer Lawrence Settles the Age-Old Debate of Whether Liam Hemsworth or Bradley Cooper Is a Better Kisser
Next Up: Editor's Pick