Royal baby No. 3 is officially here and it’s another boy for the Duke and Duchess of Cambridge. After arriving at St. Mary’s Hospital in London on Monday, Kate Middleton gave birth to her third child with Prince William at 6 a.m. EST.

Kensington Palace released a statement shortly after the birth announcing that the new prince had arrived. “Her Royal Highness The Duchess of Cambridge was safely delivered of a son at 1101hrs. The baby weighs 8lbs 7oz. The Duke of Cambridge was present for the birth. Her Royal Highness and her child are both doing well,” Kensington Palace tweeted.

Middleton was admitted to the hospital in the “early stages” of labor with the royal baby earlier on Monday.

When they are ready to leave St. Mary’s, Their Royal Highnesses will likely pose for photos with the new baby outside the hospital’s private Lindo Wing, just as they did with Prince George and Princess Charlotte.

Kensington announced that Middleton was pregnant for a third time on Sept. 4, around a month before revealing that she was due sometime in April. “The Duke and Duchess of Cambridge are delighted to confirm they are expecting a baby in April 2018,” the Palace tweeted.

Kate and William have yet to release the royal baby’s name.

You can see a photo of the traditional birth announcement bulletin—which was framed and placed on a golden easel outside the palace—below. 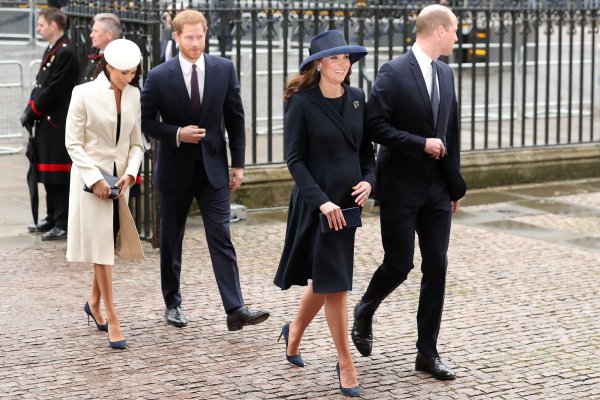 Kate Middleton Just Gave Birth to Royal Baby No. 3: Watch Live as Crowds Gather Outside the Lindo Wing
Next Up: Editor's Pick