Leave it to Jennifer Lawrence, Oscar winner and eternally relatable human, to confirm that she’s the late night MVP. The Red Sparrow actress, who memorably filled in for Jimmy Kimmel for a rollicking interview with Kim Kardashian West during her last round up of the late night shows, returned to the circuit with an appearance on The Late Show with Stephen Colbert that involved the two of them taking shots of Cuban rum and kicking off their shoes.

While Lawrence used some of her time with Colbert to talk about her humanitarian work (apparently, she’s been working to help students stay informed about the pitfalls of big business influencing politics,) the fun really starts when Lawrence takes off her shoes. From then, she calls Harvey Weinstein, “the horrible -ss boil that does not go away” and chattily recounts how she attended Amy Schumer’s wedding, but ditched the lady of the hour to have a “one-sided” flirting session with Larry David, which sounds like it went pretty, pretty, pretty good.

This isn’t the first time that Lawrence has shown that she’s willing to let loose for a little fun; leading up to the Super Bowl, the actor took over the PA system of the flight that she was on to lead the passengers in a rousing “Fly, Eagles, Fly” chant for the Philadelphia Eagles ahead of their ultimate victory. 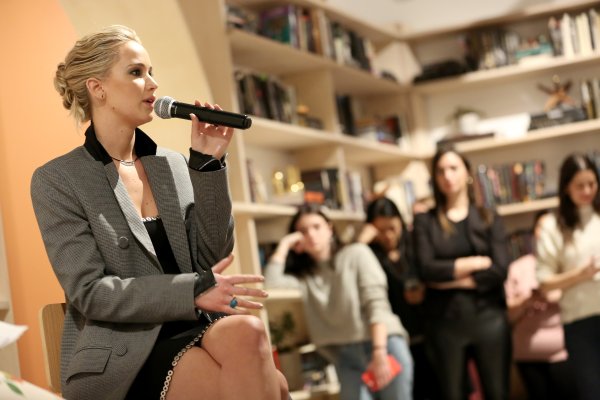 Jennifer Lawrence Discusses the Turning Point That Finally Got Her Into Politics
Next Up: Editor's Pick