Membership in Gun Groups Is Spiking After the Florida Shooting

People sign up at the booth for the National Rifle Association (NRA) at the Conservative Political Action Conference (CPAC) at National Harbor, Md., on Feb. 23, 2018.
Joshua Roberts—Reuters
By Alana Abramson

The National Rifle Association and its allies have found their political influence under fresh scrutiny as gun control advocates push for new restrictions and corporations sever their ties in the wake of the deadly high school shooting last month in Parkland, Florida. But outside the gun control debate in Washington, membership in the NRA and gun rights groups across the country, which includes more than five million Americans, is spiking, according to people familiar with the numbers.

The spike isn’t a surprise, as such increases happen whenever people feel their Second Amendment rights are under threat, and many groups reported similar surges after the 2012 shooting at Sandy Hook Elementary School in Newtown, Connecticut. But as gun control groups seek to use the anti-NRA backlash to mobilize their grassroots, recruitment this time seems to have taken on a more urgent tone.

“Wake up people and see what’s happening!!!!,” Charles Cotton, a member of the NRA Board of Directors, wrote on a message board, TexasCHLforum.com, a site described as “the focal point for Texas firearms information and discussions, earlier this week. “[Former New York Mayor Michael] Bloomberg and Hollywood are pouring money into this effort and the media is helping to the fullest extent. We’ve never had this level of opposition before, not ever. It’s a campaign of lies and distortion, but it’s very well funded and they are playing on the sympathy factor of kids getting killed. If you really want to make a difference, then start recruiting NRA members every single day.”

“The NRA better be 15 million strong soon, or this is only going to get worse,” Cotton, who didn’t respond to a request for comment, added on the message board.

Representatives from over a dozen gun rights organizations and shooting associations in California, Connecticut, Florida, Georgia, Illinois, Massachusetts, Missouri, New York, Nevada, New Hampshire, South Carolina, Texas and Virginia told TIME they have seen membership rise since the Feb. 14 shooting left 17 dead at Marjory Stoneman Douglas High School. And two people familiar with the workings of the NRA, who spoke on condition of anonymity because they weren’t authorized to discuss membership numbers, said that since the shooting the NRA has also seen more people than usual join, renew memberships or donate money as President Donald Trump and other Republican Party leaders have signaled an openness to gun control policies that are anathema to the powerful group. A spokesperson for the NRA, which says on its website that it has more than five million members, didn’t respond to requests for comment.

Activists hold up signs at the Florida State Capitol as they rally for gun reform legislation in Tallahassee, Fla., on Feb. 26, 2018.
Don Juan Moore—Getty Images

“As soon as anti-gun attacks started coming in on Twitter, Facebook, and in the media, we began to hear from people who didn’t even own guns who wanted to join up or contribute out of solidarity in defense of the Second Amendment to the Constitution,” said Patrick Parsons, who heads the Georgia Gun Owners, an independent gun rights organization in Georgia. Parsons said the group’s membership, which he estimated at 13,000, had increased by 1,000 over the past two weeks, and that he had been “working around the clock taking calls, answering emails from interested people, sending out new member packets.”

Dudley Brown, the president of the National Association for Gun Rights, estimated his organization — which claims more than 4.5 million “members and supporters” on its website — estimated online membership applications at his organization could have grown by 30% over the last week, a number he expected to rise after Trump this week called for comprehensive gun reform legislation, including raising the age limit for buying certain weapons to 21. The Connecticut Citizens Defense League, which has a membership of almost 29,000 people, said it typically gets 15 or 20 applications a week, but received almost 200 in the last week. Gun Owners of America, which says it has 1.5 million members, amassed “hundreds” of new members in the last week, according to an official at the organization familiar with membership numbers who spoke on condition of anonymity. The organization said it has seen it’s membership grow by thousands since the Las Vegas shooting last October. Don Turner, the President of the Nevada Firearms Coalition and NRA member, estimated membership renewals and requests had increased by 20 percent at his organization since Parkland, although this is an increase he said he did not witness after the shooting in Las Vegas.

“Gun owners themselves weren’t being demonized [after Las Vegas]” Turner explained. “But after the Florida shooting, there was a definite push to demonize honest gun owners and to demonize the NRA. And I think that’s what’s provoked their response.”

A model walks the runway during the NRA Concealed Carry Fashion Show in Milwaukee, on Aug. 25, 2017.
Joshua Lott—AFP/Getty Images

After the deadly 2012 shooting at Sandy Hook Elementary School in Newtown, Connecticut, when the gun control debate also reached a fever pitch, the NRA said it had gained 100,000 members in 18 days; NRA executive Wayne LaPierre announced that May that the organization’s membership had reached 5 million, although that claim is impossible to independently verify since membership rolls and figures are not publicly released. NRA tax filings from 2013, published by ProPublica, show that in 2013, overall revenue increased by more than 35% from the previous year, with a nearly $10 million increase in contributions. Revenue from membership growth from 2012 to 2013 increased by nearly $70 million, and the percentage of membership dues contributing to total revenue growth increased from 42 percent to 50 percent, the tax filings show.

Experts who closely watch gun rights groups said that while the NRA has remained silent about its membership numbers after the latest shooting, the rise in membership of other groups demonstrates the grassroots mobilizing power that is key to the NRA’s influence. “It’s not just a gun lobby, it’s much bigger than that,” said Scott Melzer, a sociology professor at Albion Colege who has spent almost a decade researching the NRA and is the author of Gun Crusaders: The NRA’s Culture War. “It relies on the support of a very large and activist membership base, and that base and that movement is connected to the broader conservative movement.”

Gun rights activists said the membership increase is also fueled by a feeling that public rebukes such as corporations ending partnerships with the NRA are simply publicity stunts. “There is no one. NO ONE. Who joins the NRA for a discount on a rental car,” Cleta Mitchell, an NRA member and former Oklahoma state lawmaker who sat on the NRA’s board from 2002 to 2013, said in an email. She was referring to Hertz ending its discount program for NRA members.

A general view of Marjory Stoneman Douglas High School as staff and teachers prepare for the return of students in Parkland, Fla., on Feb. 27, 2018.
Rhona Wise—AFP/Getty Images

“You can rest assured that the NRA will not lose a single member as a result of this,” Mitchell said. “If anything, it should spur people to join the NRA as a means of demonstrating that we who believe in the Second Amendment will not be bullied by these left wing multi-billion dollar corporations.”

But as Cotton, the NRA board member, noted on the Internet forum, the spike in membership reported by these gun rights groups are are coming at the same time that some gun-control proponents are hoping the Florida shooting and the high-profile activism of the student survivors may finally push Congress to act. The gun-control advocacy group Everytown for Gun Safety said it has fielded inquiries from over 125,000 volunteers since the shooting, and received over $1.5 million in unsolicited donations in the immediate aftermath. And a new poll shows support for gun control in the country has reached its highest level in 25 years. So while these gun rights groups may be gaining members, it’s ultimately unclear if that will make a difference.

“The gun lobby is very good at marketing themselves and guns in the wake of mass shootings,” said Shannon Watts, the founder of Moms Demand Action. “They specialize in exploiting shooting tragedies. No, I’m not surprised [about memberships increasing] but at the end of the day it doesn’t really matter, because the vast majority of Americans support stronger gun laws and gun safety.” 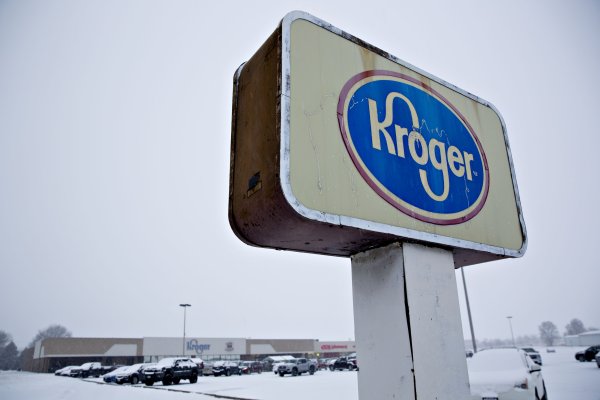 Kroger Will No Longer Sell Guns to People Under 21
Next Up: Editor's Pick