Des Moines, Iowa, students Mary Beth Tinker and her brother, John display two black armbands, the objects of the U.S. Supreme Court's agreement on March 4, 1968, to hear arguments on how far public schools may go in limiting the wearing of political symbols.
Bettmann—Getty Images
By Olivia B. Waxman

High-school students nationwide have already taken to the streets in response to the Feb. 14 shooting at Marjory Stoneman Douglas High School in Parkland, Fla., which left 17 dead. Pressing for a variety of gun-control and school-safety measures, they have staged “die-ins” and walkouts, and are working on more: the #Enough! National School Walkout is planned for March 14, with another National High School Walkout planned for April 20, and the March for Our Lives is scheduled for March 24. As they continue to campaign for school shootings to “Never Again” happen, as signaled by the name of their movement, they have drawn national attention — including praise from former President Barack Obama.

But not everyone feels the same way, and these plans have raised questions about students’ rights when it comes to protest.

For example, in what appeared to be a preemptive move, the superintendent of a school district about an hour southwest of Houston issued a warning to students thinking of protesting — a warning that quickly went viral in February. As Curtis Rhodes, Needville Independent School District’s Superintendent, wrote in a now-deleted Facebook post:

The question of whether students can protest during school hours was in fact addressed by the U.S. Supreme Court nearly half a century ago. And, in light of that case, legal experts tell TIME that, because it’s so broad, the Needville policy as expressed in the Facebook message is likely unconstitutional.

In 1969, the court ruled that students do not “shed their constitutional rights to freedom of speech or expression at the schoolhouse gate,” as Justice Abe Fortas put it in the majority opinion for Tinker v. Des Moines Independent Community School District.

At the center of the case was a 13-year-old from Des Moines named Mary Beth Tinker and her 15-year-old brother John, who were part of a group of five public school students suspended on Dec. 16, 1965, for wearing black armbands to school to protest the war in Vietnam. They weren’t allowed to go back to school until they agreed to go without wearing the armbands, so the Tinkers stayed home for a week. When they returned to school, they wore all-black clothes on the advice of the ACLU.

Tinker, a retired pediatric nurse who now lectures on First Amendment rights at schools, had been inspired to speak out after seeing images of body bags and displaced children on the nightly news. Her brother had attended a march in Washington earlier that year and brought home the idea to wear armbands.

“We were upset when we saw signs of killing right around Christmas,” she tells TIME. “We wanted to speak up for peace at Christmas time. My dad was a Methodist minister, and he always said if you don’t follow your conscience, we could have the Nazis.”

When the case made it to the Supreme Court, with the Tinkers as plaintiffs, the majority found that generally students can express political views as long as those expressions don’t disrupt school operations, the educational process or the rights of other students to learn, explains Bernard James, an education law expert and professor at Pepperdine University School of Law. The case significantly weakened the principle of in loco parentis, the legal idea that the school serves in place of the parent while a student is in attendance, and can thus absorb some of a child’s personal rights. Though the Supreme Court ruled in subsequent cases that certain kinds of student speech can be limited — such as when it contains gratuitous “lewd speech” (Bethel School District v. Fraser, 1986) or advocates illegal drug use (i.e. the “Bong Hits 4 Jesus” banner at the center of 2007’s Frederick v. Morse) — the majority in Tinker found that armband-wearing students weren’t enough of a distraction to merit the school’s response.

And, looking back nearly five decades later, Mary Beth Tinker says the armbands were hardly a distraction at all — and that those moments when her protest was disruptive were mostly caused by adults, such as the math teacher who sent her to the principal’s office. Other students and teachers “pretty much ignored me,” she tells TIME. Her brother John’s experience was the same. “I wore the armband for the first three periods and nobody really noticed,” he says.

So where does the Texas school district’s pronouncement fall?

As Bernard James explains, what’s key here is that, while the message to students does mention disruption, it appears to be saying that students will be punished for voicing dissatisfaction, rather than that they will be punished if their actions do in fact disturb the course of the school day. “It falls on the unconstitutional side of the line because it appears to link punishment with the content of the student expression itself,” he says, “rather than the disruptive effects.”

“It’s almost comical in its overreach because basically it’s saying that a group of kids can’t wear black armbands in mourning for the students who were slain in Florida — but that’s precisely what Tinker v. Des Moines was about,” says Rep. Jamie Raskin (D-MD), author of We the Students: Supreme Court Cases For and About Students. The most problematic part in this “overly broad” warning is the ban on raising awareness, he says, because it suggests that the superintendent is opposed to students debating or discussing the news. “That’s the very opposite of what education is in a democratic society,” he says.

And ultimately, the superintendent doesn’t have the last word on what constitutes a disruptive protest.

“The court in Tinker took the position that it’s not within the unilateral authority of the school to decree that something is disruptive,” Raskin says. “It’s a question that the courts will have to determine.”

So in some ways the Texas school notice does get at the underlying legal principle: choices do have consequences for students. Depending on the type of protest and how receptive school officials are, those consequences can vary widely. For example, truancy is generally not protected by Tinker, James says. On the other hand, that might not matter, as some educators may themselves be planning to protest. And in any case, to the Tinkers, it seems as if school districts would do well to embrace the protests.

“I really wish that administrators could see the opportunity for the object lesson,” John Tinker says. “You’ve got a lot of students right now who are very concerned with an issue, this is a perfect learning opportunity.”

“It’s established law that you can’t stop students from expressing themselves peacefully in schools — and besides, why would we want to?” Mary Beth echoes. “We want our children to be civically engaged. We want to encourage them to practice democracy and not just learn it for some standardized test.” 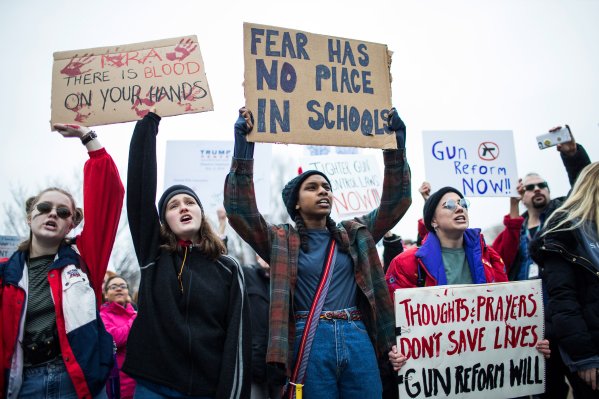 Students Calling for Gun Control Can't Vote Yet. But Age Hasn't Stopped Young Activists in the Past
Next Up: Editor's Pick