It was to be expected that Wayne LaPierre, the Executive Vice President of the National Rifle Association (NRA), would talk about guns and the importance of the Second Amendment during his speech at the Conservative Political Action Conference (CPAC) on Thursday. But LaPierre also fiercely criticized institutions like the FBI and the mainstream media — and did so using rhetoric that, at times, sounded a lot like President Donald Trump.

In recent days, Trump has notably broken with the NRA in being open to raising the legal age to purchase certain firearms. (He played down any disagreement with the NRA during an appearance Thursday, saying: “I don’t think I’ll be going up against them. I really think the NRA wants to do what’s right.”) But there are many similarities in how Trump and LaPierre are responding to last week’s deadly shooting at Marjory Stoneman Douglas High School in Parkland, Fla., particularly in their support for arming teachers in classrooms to prevent future school shootings.

“Every day young children are being dropped off at schools that are virtually wide open soft targets for anyone bent on mass murder,” LaPierre said during his CPAC speech Thursday. “It should not be easier for a madman to shoot up a school than a bank or a jewelry store or some Hollywood gala. Schools must be the most hardened target in this country and evil must be confronted immediately with all necessary force to protect our kids.”

LaPierre’s remarks echoed a series of tweets Trump posted just hours earlier, as well as comments he made to Florida students when they came to the White House the day before. The Florida shooting left 17 people dead and reignited America’s gun control debate to a fever pitch, with students across the nation leading anti-gun walkouts and protests, including March for Our Lives in Washington, D.C.

While it has long been the NRA’s position that there should be more guns in schools to guard against mass shootings — “the only way to stop a bad guy with a gun is with a good guy with a gun” is a talking point LaPierre has used for years — LaPierre followed Trump’s lead during his CPAC speech, fiercely criticizing the FBI for the Florida shooting. The FBI has acknowledged it failed to properly investigate a tip about alleged shooter Nikolas Cruz.

“As we’ve learned in recent months, even the FBI is not free of its own corruption and its own unethical agents,” LaPierre said, appearing to blaming the agency for leaks to the media. “What is hard to understand is why no one at the FBI stood up and called B.S. on its rogue leadership.”

Trump has similarly painted the FBI as too focused on proving that his campaign colluded in Russia’s 2016 election meddling to protect the country and described its reputation as being in “tatters.”

Trump’s and LaPierre’s attacks on Thursday also extended to the mainstream news media, long a favorite foil of conservatives – and perhaps Trump more so than anyone. Just as the President has dismissed stories and even entire news outlets whose coverage is unfavorable to him as “fake news,” LaPierre lamented that coverage of the Second Amendment and gun control issues is unfairly skewed, saying journalists “hate the NRA” and are “eager to smear” the organization. Speaking at the NRA’s annual meeting last year, LaPierre said the media was constructing a “calculated campaign to destroy honest truth… to dictate how we should think, how we should feel, or how we should act.”

The NRA was an early backer of Trump, and spent $30 million supporting his candidacy, according to the Center for Responsive Politics. “They put a big bet on Donald Trump and they won,” Robert Maguire, an investigator with the Center for Responsive Politics, told TIME in a recent interview before Trump expressed new openness to limited gun control measures. “And thats particularly interesting because of all the sacred cows he’s gored as President, the 2nd amendment and the NRA are not one of them.”

Indeed, before his election, Trump vowed loyalty to NRA members. “The only way to save our Second Amendment is to vote for someone you know named Donald Trump,” he told NRA members during their annual gathering in 2016, shortly after the NRA endorsed him. “I will never let you down.”

And despite whatever daylight may open in the days ahead between Trump, LaPierre and the NRA — on strengthening background checks, raising age requirements for gun purchases, and how exactly to change the rules around “bump stocks” — they agree on something else: that the NRA cares.

“What many people don’t understand, or don’t want to understand, is that Wayne [LaPierre] Chris [Cox] and the folks who work so hard at the NRA are Great People and Great American Patriots,” Trump said Thursday morning on Twitter. “They love our Country and will do the right thing. MAKE AMERICA GREAT AGAIN!”

Just hours later, LaPierre declared of gun control advocates during his CPAC speech: “They don’t care if their laws work or not,” he added. They just want get more laws to get more control over people. But the NRA, the NRA does care.” 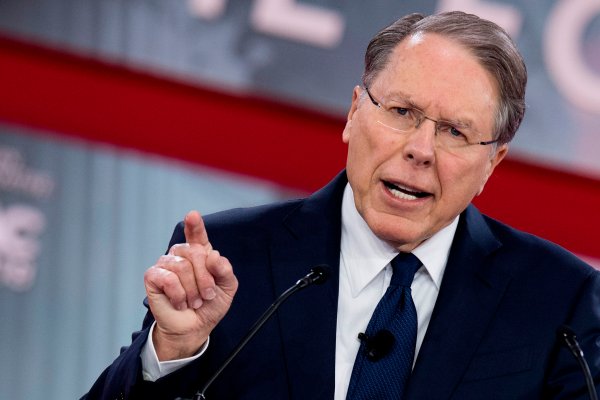