The final week of the 2018 Winter Olympics in PyeongChang, South Korea has been filled with hardware for Team USA.

But the Games will soon come to an end. While competition has been intense for the U.S. all along, there are still a few key events left to watch.

Here are several big events to watch before the Closing Ceremony.

Competitors in the women’s single skating event will have their last chance to make it on the podium with the free skate. Alina Zagitova and Evgenia Medvedeva of the Olympic Athletes from Russia came out on top during the women’s short program earlier this week, with the U.S.’s athletes far behind in 9th, 10th and 11th place.

The U.S.’s Mirai Nagasu attempted a triple axel during her short program but fell upon landing. Ranked 9th going into the free skate, Nagasu helped the U.S. win a bronze medal in the Team Event earlier in the Games thanks to her historic triple axel.

When to watch the women’s Figure Skating final on TV: Thursday at 8 p.m. ET

While Americans have dominated snowboarding events so far, the new snowboarding big air event will be a more difficult moment to capture gold.

Medal-favorite Mark McMorris of Canada is expected to come out on top. Three Americans have qualified for the men’s big air event, including Kyle Mack, Chris Corning and Red Gerard, who stunned viewers with his gold-medal win in the slopestyle event early on in the Games.

When to watch the men’s Snowboarding Big Air final on TV: Friday at 8 p.m. ET.

Decorated speed skater Shani Davis will compete in what could be his last-ever Olympics event with the men’s 1,000 meter race. Davis, who was the first African American to ever qualify for the U.S. Olympic speed skating team, also is the first man to win back-to-back gold medals in the men’s 1,000, which came in 2006 and 2010.

When to watch the men’s 1,000m Speed Skating event on TV: Friday at 5am ET

Skaters compete during the men mass start final on Day Two during the ISU World Cup Speed Skating at the Thialf on November 11, 2017 in Heerenveen, Netherlands.
Christof Koepsel - ISU—ISU via Getty Images

With 24 speed skaters taking the track in the first-ever Olympic mass start, this event is sure to be a chaotic one to watch. The new event brings an exciting element to the sport, with all competitors on the ice at once and medals for the top three to cross the finish line.

When to watch the Speed Skating Mass Start on TV: Friday at 7:30 am ET

For the first time in U.S. history, the men’s curling team will battle for gold in the final match for the sport at the Winter Olympics. The team, led by Olympic veteran John Shuster, beat Canada, a medal-favorite, 5-2 on Thursday, securing their historic spot in the finals. The gold medal match comes after years of lackluster performances from the U.S. men’s curling team at the Olympics, where they placed last in 2010 and second-to-last in 2014.

When to watch the men’s Curling final on TV: Saturday at 3 a.m. ET 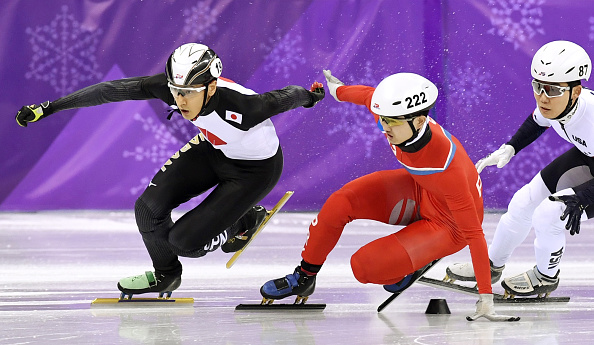