Come what may, ice dancing virtuosos Tessa Virtue and Scott Moir of Canada were determined to finish on top at the 2018 Winter Olympics in PyeongChang, South Korea. And it turned out that fate was in their favor this year, as they clinched a gold medal after completing their free skate on Monday.

To the dramatic refrains of their Moulin Rouge medley, the popular pair of Virtue and Moir gave a picture-perfect performance of twizzles, surprising lifts and synchronized steps. (They even included a lift they had previously deemed too risqué, prompting an audible gasp from the audience at the Gangneung Ice Arena.) Although they were the last pair to skate, they were awarded the most points, followed by competitors Gabriella Papadakis and Guillaume Cizeron of France with silver and the U.S.’s Maia and Alex Shibutani with bronze.

This is the Moir-Virtue team’s third Olympic gold in ice dancing, after winning in 2010 in Vancouver and helping Canada snag a team gold this year in PyeongChang. Their three golds also means they are tied with three other individual figure skaters for the most medals in Olympic figure skating history.

Over their 20-year partnership, Moir and Virtue have won a legion of fans around the world. And this year, they’ve become especially beloved by new and returning spectators alike for their passionate performances and undeniable chemistry, on and off the ice.

After their big finish, the internet was overwhelmed with joy for the pair — and emotion, since this may well be their final competitive skate together. Within minutes, their names were trending on Twitter. 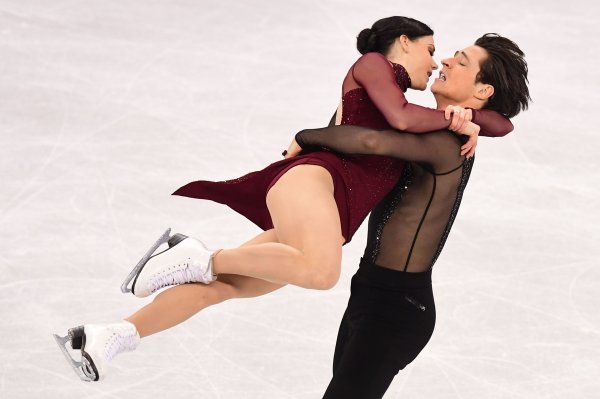 Tessa Virtue and Scott Moir Triumph in Ice Dance
Next Up: Editor's Pick