Parkland, Florida Shooting: A Timeline From the Attack to the Arrest

A man placed in handcuffs is led by police near Marjory Stoneman Douglas High School following a shooting incident in Parkland, Fla. Feb. 14, 2018 in a still image from video.
WSVN.com/Reuters
By Lisa Marie Segarra

As authorities piece together information in Wednesday’s school shooting in Parkland, Fla., details are emerging on the timeline of events that took place in and around Marjory Stoneman Douglas High School.

Police released a timeline of the movements of accused shooter Nikolas Cruz Thursday. Cruz is said to have confessed to the shooting that killed 17 people and wounded 14 others. Here is what authorities say alleged shooter is alleged to have done before, during, and after the shooting:

The suspect exited an Uber car, arriving at Marjory Stoneman Douglas High School around dismissal time. Uber has confirmed to TIME that Cruz did use the service and said they are working with authorities.

The shooter allegedly enters the school and takes his AR-15 out of a case. He begins shooting into three classrooms, returning to two of them, shot into anther classroom, then shot into two more classrooms before dropping his rifle.

The suspect is believed to have run outside, mixing in with students who were running away from the scene.

Police say the alleged shooter went into a Walmart and bought a drink at a Subway before leaving on foot.

The suspect allegedly walked into a McDonald’s, sat down for a while and then left on foot again.

Cruz was taken into custody by a police officer without incident, after the officer matched the 19-year-old’s clothing with a description being shared by authorities. 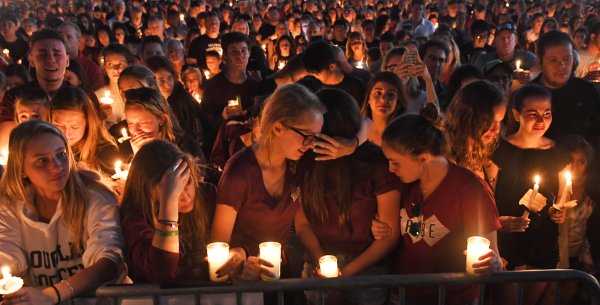 Thousands Mourn Victims of the Florida School Shooting
Next Up: Editor's Pick