After his inspiring free skate in the Olympic figure skating team skating event in PyeongChang, Adam Rippon is officially a star — and not just for what he’s doing in figure skating. “I’m America’s sweetheart,” he says, jokingly.

The love affair continued on Friday as Rippon competed in the men’s individual skating event. Skating his short program this time, set to “Let Me Think About It,” Rippon cemented his reputation as Team USA’s lovable, quotable skating maverick. With a mistake-free clean skate, Rippon found himself leading the U.S. men’s skating team, in seventh place. Teammate Vincent Zhou is in 12th place, while gold medal favorite Nathan Chen, who botched all of his jumps, sits in 17th. “So far I’m two for two,” Rippon said after this skate. “Tomorrow I’ll make it three for three.”

His short program is all Rippon. “That song is one of my favorite songs from the past 10 years,” Rippon says to TIME of the dance club piece. “Part of me thought I’ll never skate to it, but I brought it to my choreographer and we were like, yeah, let’s do it.”

It’s not a demonstration of technical prowess; he doesn’t even attempt a quadruple jump, as some of the top medal contenders do, and he even chooses a slightly easier triple-triple combination as well. But Rippon is not about showing off his jump prowess. By his own admission he’s not known as a talented jumper, so he chooses to focus on the components score, which includes things such as skating skills (he’s a talented spinner), transitions in choreography, interpretation of music and performance — which is where Rippon really shines.

At the end of his skate, a spent Rippon admitted he needed a few minutes to recover. “Everyone else in the competition is 18, so I just needed like one minute to catch my breath,” the 28-year-old says. “The rest of the kids, they’ll be fine. I just needed a second.”

The world is just meeting Olympian Adam Rippon at the 2018 Winter Olympics in PyeongChang, thanks to his pointed back and forth with Vice President Mike Pence about Pence’s record on gay rights, and his newfound friendship with Reese Witherspoon. But what an entrance. Fans are enthralled by Rippon’s self-deprecating confidence and honesty that’s simultaneously bracing and endearing (“I’m a glamazon bitch ready for the runway,” he tweeted in response to haters).

But Rippon wasn’t always this self-assured. “I know what it’s like to be a young kid who feels out of place,” he says. “To want to share your ideas and feel like people might not like them. I spent a lot of time worrying what people thought of me.”

Adam Rippon inspired by his mother

Growing up in Clarks Summit, Penn., Rippon says he didn’t always feel comfortable expressing himself. And that included revealing his sexual orientation. “I remember thinking as a young kid I was never going to share this with anybody,” he says. “This will be a secret I keep with me my entire life.”

The oldest of six children, Rippon credits his mother, Kelly, for helping him find his own voice. His mother raised the family after divorcing their father when Adam was 14. “In my darkest times I remember the words of my mom,” he tells TIME. “She’s a really smart lady, and always taught me to pursue my goals, and that if I do anything to give it 100%. I’ve taken that with me and I really feel it is part of my core now.”

Over coffee and cake in a café along one of Gangneung’s beaches, Kelly Rippon says she purposefully made things a little complicated for her kids so they would learn how to deal with adversity and cope with unfairness and inequity, since life, after all, is often unfair. If she were serving cake, she would give each a different sized slice, so they wouldn’t expect everything to always be divided fairly. She gave her children assignments like completing five tasks in a week so they would learn how to manage their time. “I wanted them to feel that overwhelming sense of satisfaction when they completed something like finishing a book or finishing a task,” says Kelly, a corporate behavioral management and motivation consultant.

A former dancer, Kelly applied the same advice to her own life and would escape to a nearby outdoor rink where she learned how to figure skate as an adult. She took Adam with her, but he wasn’t interested in skating as much as he was in the hot chocolate they served in the skate house. It wasn’t until he went to a friend’s birthday party at an indoor rink that he became hooked, and he asked his mom for lessons and a pair of skates.

As Adam showed promise and began progressing through first novice and then junior and senior levels, he trained under some of the most prominent coaches in the world, including Brian Orser in Canada, an Olympic medalist who coached Olympic champion Yuna Kim and is currently working with gold medal favorite Yuzuru Hanyu from Japan; and Jason Dungjen, a two-time U.S. pairs champion, in Detroit, Mich.

In 2012, he made another change, decamping from Detroit to California, to work with Rafael Arutunian, who had coached Michelle Kwan and Ashley Wagner. When making the move to Lake Arrowhead, Rippon decided that he wanted to support himself and his skating career, and together with Arutunian, determined he would no longer rely on his mother to pay his bills. Kelly says Arutunian returned money she normally paid him for traveling with Rippon, saying Rippon would be paying him going forward from ice shows he was doing. It wasn’t easy; he slept in a room in Arutunian’s basement, and spent what little money he earned on a gym membership. When he couldn’t afford groceries, he would help himself to a few more of the complimentary apples provided at the gym.

Adam Rippon of the United States performs in the men's single skating free skating in the Gangneung Ice Arena at the 2018 Winter Olympics in Gangneung, South Korea.
Morry Gash—AP/Shutterstock

It was during those lean years that he became closer friends with Mirai Nagasu, who lived in nearby Arcadia. Nagasu won the national ladies title in 2008, and at a Champs Camp for elite skaters that year, she and Rippon became fast friends. Rippon would spend most weekends at Nagasu’s home. The world junior gold medalist in 2008 and 2009, Rippon, along with Nagasu, set their sights on the Olympics in 2014. At the Olympic trials that year, Nagasu finished third, and there were three spots on the Olympic team for ladies, but she was passed over for the team by fourth place finisher Wagner, who had had better results at international competitions that season. Rippon had his lowest ranking yet at a senior nationals, eighth, and failed to make the two-member men’s team.

“I wanted to quit skating,” he says. “I didn’t feel like my heart was in it any more.” Kelly remembers walking out of the arena with Adam after the competition. “He didn’t say anything; he was just so angry with himself. I said to him, the only thing that is life or death is life or death; this isn’t the end. He said, I don’t think I have it in me to try again. And I told him you never go to the grocery store when you’re hungry so never make a big decision after a big disappointment. Put a few sleeps in before you make a big decision like that.”

“I felt like I had so much more to give as an athlete,” he says. “I still felt I could improve as an athlete and still be so much better than I was.”

Arutunian believed that as well, and even when Rippon broke his foot in practice in 2017, a year before the Olympics, he remained convinced that he would make the trip to PyeongChang. Once the bones had been set and the swelling had gone down, he went to Colorado Springs for a few months for rehabilitation at the Olympic training center there. As he was sitting on the therapy table one day, he looked up at the Olympic countdown clock and saw it had turned to 365 days until the opening ceremonies in PyeongChang, exactly one year away. “I remember never losing that faith that I would be able to do it,” he says. “I gave myself another chance four years ago and I gave myself another chance last year. I realized that it’s okay to make mistakes. If you make mistakes and wonder why, you aren’t getting anywhere. If you make mistakes and learn from them, you can grow and be better.”

That maturity is helping Rippon become a strong advocate for LGBTQ rights as well, especially for young people who may feel isolated or different and are afraid to express their true selves. “I know that fear. I know that pit in your stomach where you worry about what other people will think of you,” says Rippon. He is hoping that by being vocal and supportive of LGBTQ rights, he will help some young people by being a role model. “To have so many messages from people whom I’ve never met who say they are so proud of me for speaking out, I’m just speaking from the heart,’ he says. “I’m really just being myself. I hope in the process of me sharing who I am with everyone, that they can find their voice too. It’s really fun to be yourself. It’s really fun to be me.” 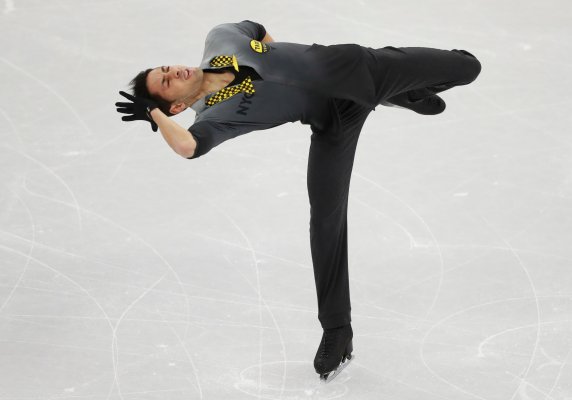