It’s been less than two months since the new year began, but 2018 is already shaping up to be a big one for the Royal Family. Not only are Prince Harry and Meghan Markle set to tie the knot in May, but also Kate Middleton is pregnant with her third child with Prince William.

The Duke and Duchess of Cambridge announced that they were expecting another royal baby back in September, an addition that will expand their current brood of two to three. Middleton gave birth to her first child with William, Prince George, on July 22, 2013. Their daughter, Princess Charlotte, followed nearly two years later on May 2, 2015.

Their Royal Highnesses are choosing to not reveal the baby’s gender, as they did before both Prince George and Princess Charlotte were born. However, some fans speculate that Kate Middleton and Prince William’s 2017 Christmas Card—which featured a photo of the family all dressed in blue—was a hint that they are expecting a boy.

Here’s everything we know about Kate Middleton’s pregnancy, due date and the new royal baby.

When is Kate Middleton due?

The official Kensington Palace Twitter account announced that Kate Middleton was pregnant on Sept. 4, sharing a press release that revealed she was again suffering from severe morning sickness, also known as hyperemesis gravidarum. She was affected by the same condition while pregnant with both Prince George and Princess Charlotte.

Middleton made her first public appearance after the third baby announcement at a Oct. 10 reception at Buckingham Palace in honor of World Mental Health Day.

About a week later on Oct. 17, the Palace divulged that Kate Middleton is due is sometime in April 2018, just before Princess Charlotte’s third birthday. This means that royal baby number three will be here before Prince Harry and Meghan Markle’s wedding.

What are the most likely royal baby names?

The Duke and Duchess of Cambridge attend the BAFTAs at Royal Albert Hall on February 18, 2018.
Max Mumby/Indigo/Getty Images:

The third royal baby’s gender may still be a mystery, but London-based bookmaker William Hill is betting on another girl for Kate and William. The bookie has set royal baby names odds at 3/1 for Mary, with Alice close behind at 6/1, Victoria at 10/1 and Elizabeth at 14/1.

The name Diana has been given royal baby name odds of 20/1, indicating there is also some speculation that the Duke and Duchess will pay tribute to their child’s late grandmother, Princess Diana.

How could the royal baby make history?

The third royal baby could make history by becoming fifth in line to the British throne regardless of its gender. Thanks to the 2013 passing of the Succession to the Crown Act to end the system of male preference primogeniture—which had been in place since the Act of Settlement of 1701—a boy baby would be the first prince not to take precedence over his older sister in the line of succession.

The law came into effect in 2015, meaning Princess Charlotte will remain fourth in line to the crown whether she gets a younger brother or a younger sister in April. However, Prince Harry will still move down to sixth in line after his new niece or nephew is born.

What can we expect when the royal baby is born?

Kate Middleton gave birth to both Prince George and Princess Charlotte in the private Lindo Wing of St. Mary’s Hospital in London, making it probable that the third royal baby will also be born there.

After each previous birth, Kate and William reportedly spent some time in the hospital quietly celebrating with the medical team and their staff before introducing the new baby to the world on the steps of the Lindo wing, according to People.

However, while the Duchess stayed in St. Mary’s overnight following George’s birth, she left the hospital just 10 hours after Charlotte was born. The amount of time Kate and William spent posing for pictures was also shorter with Charlotte, indicating that the couple could try to keep the birth of the third royal baby an informal affair. 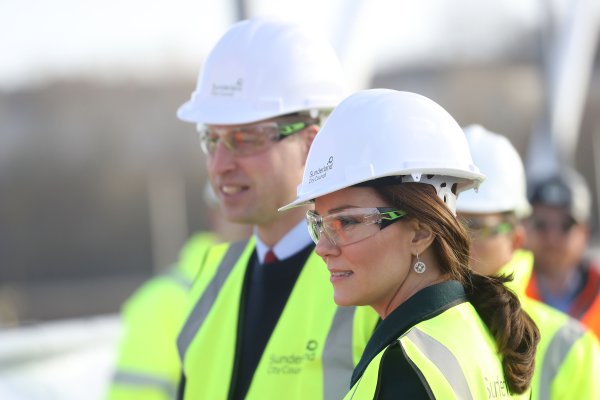