This Skier is the First Athlete to Compete at the Winter Olympics for Puerto Rico in 20 Years. Here's Why

Flag bearer Charles Flaherty of Puerto Rico and teammates arrive at the stadium during the Opening Ceremony of the PyeongChang 2018 Winter Olympic Games at PyeongChang Olympic Stadium on February 9, 2018 in Pyeongchang-gun, South Korea.
Matthias Hangst—Getty Images
By Jennifer Calfas

Carrying Puerto Rico’s flag at the 2018 Winter Olympics Opening Ceremony in PyeongChang, South Korea, Flaherty beamed as the first representative for Puerto Rico at the Games since 1998, when it sent another alpine skier and two-man and four-man bobsled teams to Nagano, Japan.

However, the Puerto Rico Olympic Committee created a temporary, six-month acknowledgement of the Winter Sport Federation to allow Flaherty to compete this year. Originally from Ohio, Flaherty moved to Puerto Rico in 2010 and trains elsewhere, according to People.

The athlete, who marched at the Opening Ceremony Feb. 9 with his coach and two officials, told People he hopes the Puerto Rico Olympic Committee will continue recognize the Winter Sports Federation to make way for more athletes to compete at the Games.

“There are definitely other people out there who are eligible to go for Puerto Rico, and we want to help give them the opportunity,” Flaherty told People.

One of those athletes includes skier Kristina Krone, who had qualified for the 2010 and 2014 Winter Olympics but did not compete as a result of the Olympic Committee’s policy. 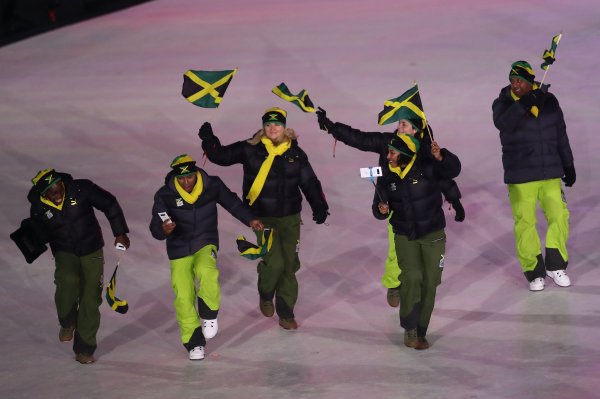 The Jamaican Olympic Team Had the Best Entrance
Next Up: Editor's Pick