A scaled-down opening ceremony at the 2018 Winter Olympics turned out to have a great deal contained within it.

That a lighting illusion at the Olympic Stadium in PyeongChang made filled seats look unoccupied (they weren’t) suited a ceremony that tended to strike notes, while resonant, in a minor key. Olympics history dictates that, generally, winter ceremonies get a less substantial push than summer ones; the most recent two summer games, in Rio de Janeiro (2016) and in London (2012) opened with paeans to global environmental causes and to the cause of British relevance in the 21st century, respectively. Both causes were comprehensible enough to U.S. audiences. PyeongChang 2018 was more complicated, even as it began with a suitably impressive staging of Korean dance, culminating in an impressive drum line. It came to be a story in which the U.S. was, for the first time in a long time, not included.

South Korea sold itself, for much of its opening ceremony, through terms maximally understood to a Western audience, up to and including the performance of a John Lennon song. The overarching narrative dealt with a group of Korean children who were seen at the beginning and then rejoined the proceedings after the Parade of Nations and were shown in video growing into successful adults in futuristic fields. It seemed to Western eyes a story of innocence untroubled by political valence. But it also told a story, though perhaps less vividly than the one China told with its Beijing opening ceremony in 2008, of a nation on the rise. Korea may have missed opportunities to promote itself: Many teams entered to what seemed like an endless loop of the 2012 Korean song “Gangnam Style”; the contemporary K-pop style was represented, if only fleetingly, through a group performance, in English, of the repeated-enough-to-be-post-meaning tune “Imagine.” But the idea that the nation was suffused with a sense of itself came through by the end of the ceremony, at which point the U.S. had already opted out.

Anchors Mike Tirico and Katie Couric made occasional missteps (they referred to “Asian cultures” and the Chinese concept “yin-yang” in order to describe Korean culture) through a generally demanding broadcast during which plenty of facts were proffered. Certain things were more challenging to address, like the televisual oddity of Vice President Mike Pence sitting through the entrance of the unified Korean athletes in pained fashion, a moment that badly demanded the sort of contextualization that has for so long seemed outside the context of American sports. What was to that point the absolute high point of the ceremony, the entrance of a host nation that has lately overcome political tensions to the degree that their Olympic entrance includes a longtime rival, was shot through with an odd tension for any American watching. That the ceremony went on to include further tributes to North and South Korean cooperation made the awkwardness yet more glaring — it was a political development, openly celebrated through the ceremony, in which neither the American team nor its broadcast partner could fully take part.

This is not to say that there wasn’t any nutritional value to the broadcast — but American viewers have little recent context for the U.S. being at the center of international tensions during the Parade of Nations. Short of the 1980 Moscow boycott, there’s little precedent for the U.S. joining the Olympic Games with anything less than cheerful enthusiasm, an attitude the 2018 national delegation put on even if its leader, on camera, could not. For all the honed perfection of a less expansive but still impressive ceremony, the most telling moments for U.S. audiences may have been after the American team had completed their run through the parade. Many of them had shed their unwieldy fringed gloves, the remnants of a Ralph Lauren dream about cowboys that’s been playing itself out for years now. Most of them were taking selfies against the dazzling backdrop, simply happy to be there. They were freed from any context but this being a celebration of sports at which they hoped to excel. Left out of the larger party, that will have to be enough for the U.S. this year. 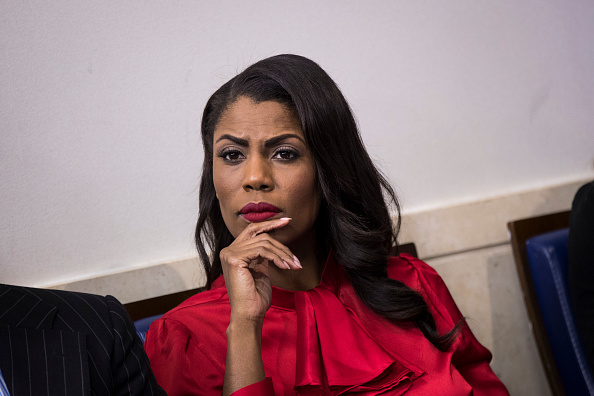 'It's Not Going to Be OK.' What Omarosa Said About Her Time in the White House on Celebrity Big Brother
Next Up: Editor's Pick