No, the Olympic Stadium Was Not Empty During the Opening Ceremony in PyeongChang

Before the 2018 Winter Olympics began in PyeongChang, South Korea, weak ticket sales plagued the Games amid domestic corporate and political scandals and concerns about escalating tensions with North Korea.

But by the time the Opening Ceremony began on Feb. 9, the 35,000-seat Olympic Stadium in PyeongChang was packed with spectators. Still, as the Opening Ceremony got underway, a number of confused viewers took to social media to inquire about what appeared to be sections of empty seats. So what happened?

As athletes from the 92 countries competing in the Games marched in, shots from NBC’s primetime coverage of the Opening Ceremony showed a large swath of empty seats behind him, giving the impression that turnout for the Opening Ceremony was low. And an LED light show blanketed the entire stadium, appearing to erase the crowds from some points of view.

These two images gave some Opening Ceremony viewers from home the impression that the Olympic athletes marched, cheered and waved their flags to an empty stadium.

Other viewers observed images produced by the light show in the stands. In wide shots of the stadium, the lights created images like snowflakes and the flags of each country as the teams stepped out during the Parade of Nations.

But in fact, the stadium was actually 95% full in the areas that were not saved for the 2,952 athletes competing at the Games as they marched in, according to the Guardian.

One of the most heavily attended events of any Olympic Games, the Opening Ceremony serves as a chance for the host country to put on performances honoring its culture and history for international viewers. Indeed, the seats are often some of the most expensive ones available at the Olympics. According to MONEY, tickets for the Opening Ceremony in PyeongChang started at just over $400 back in November, and skyrocketed up to more than $5,000 on third-party sellers like Stubhub. 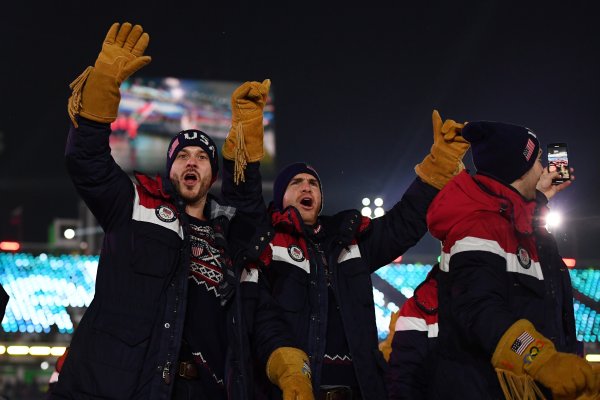