The 2018 Winter Olympic Games kicked off with an emotional opening ceremony at the PyeongChang Olympic stadium on Friday evening in South Korea. Themed “Peace in Motion,” the opening ceremony’s highlights included glittering pyrotechnics, a graceful ode to South Korean culture, bare skin and Olympic champion figure skater Yuna Kim lighting the torch after taking a few twirls on ice. You can watch the Winter Olympics opening ceremony on NBC’s primetime television broadcast starting at 8 p.m. ET on Friday, but even a painstakingly produced prime-time event can’t show you everything. So take a trip behind the scenes of the opening ceremony in PyeongChang with TIME’s reporters on the ground, who bring you seven things you won’t see on TV:

1. The opening ceremony’s stadium is like a giant superstore

The 35,000-seat PyeongChang Olympic stadium, built solely to host the Olympic and Paralympic opening and closing ceremonies, gave off a more commercial vibe than recent facilities for Olympic ceremonies. (The stadium will be converted into an exhibition center and museum dedicated to the Olympics once the Games are over.) In the plaza next to the stadium, a Samsung pavilion was selling Galaxy Note8 phones and VR gear. Coca-Cola’s corporate clients paraded around the grounds, following group leaders holding Coke signs — as if they were on a class trip.

And a gargantuan Visa Olympic Superstore took up its fair share of space. Eight greeters screamed “hello” as you walked into the store. The shelves were stacked with a wider variety of merchandise than the usual Olympic hats and T-shirt fare, like a tea cup and kettle set for 250,000 South Korean won, or around $230, a box of dried seaweed with tomato for $1.10, and a rose — labeled an “official licensed product of PyeongChang 2018,” — for $11.04. There were 58 registers available to ring you up.

2. A robot answers your Olympics questions—sort of

A robot wandered the store floor, requesting that you ask it questions about the Olympics. Where is the luge venue? The PyeongChang 2018 robot gave very, very detailed bus directions to the Olympics sliding center. It threatened to drone on forever. Who will win the men’s hockey tournament? Hockey, the robot said, is played with two goaltenders. Will Shaun White win a halfpipe gold medal? The robot’s response: “I do not understand your question.”

3. There are flags representing a unified Korea

Along fences leading to the Olympic Stadium, white flags with the silhouette of the Korean peninsula in blue — representing the unified Korea — fluttered in the icy breeze. Some Korean families snapped pictures by the road on the way to the opening ceremony. Parents explained to their children why their favorite athletes would not be marching under their familiar red, blue and black flag but this new banner instead.

Also sitting along the road to the stadium: a small shop selling all you needed for the cold event, including coffee and hot packs for less than $1, seat warmers for $4.60, and a 30-pack of small fish to snack on for a little over $9.

5. A Trump lookalike tried to attend the opening ceremony

There was a brief flurry of excitement among the journalists in attendance when two men were spotted walking casually through the media area. One had longish blonde hair and sported a red USA baseball cap while the other, a slightly chubby Asian man, rocked a fade and glasses. “It’s Trump, it’s Trump, it’s Trump,” one colleague said. Reporters strained to catch the duo as cameras and smartphones snapped away. They were escorted through the media exit and it didn’t take long for Twitter to confirm that no, President Trump and Kim Jong Un had not actually made an appearance nor made amends — the men were impersonators, who were promptly removed from the Olympic Stadium after their stunt.

6. Not every athlete loved the ‘Gangnam Style’ soundtrack at the opening ceremony

Before entering the stadium, the athletes from 92 countries and territories marching in the parade of nations waited in an outdoor staging area. The Americans seemed a bit taken aback when they realized “Gangnam Style,” the infectious but at this point fairly annoying 2012 K-pop megahit, would be playing during their dream moment, as they walked into the opening ceremonies and the 2018 Olympics. “If I hear Gangnam Style one more time …” said one athlete. “They’re playing Gangnam Style for us?” said another, in clear disbelief. Soon, however, the Americans warmed up to the song. It’s a catchy dance tune, and the Americans had to move around to stay warm. No one, however, was dancing harder than Soohorang, the Olympic mascot, as the American team passed by.

7. Tonga’s shirtless cross-country skier had to psych himself up for the cold temperatures

“I’m waaaaaaarm,” Pita Taufatofua, the cross-country skier from Tonga, screamed in 20-degree weather as Olympic volunteers cheered upon seeing he’d be entering another opening ceremonies oiled and without a shirt. Taufatofua famously went shirtless, in a traditional Tongan outfit, at the 2016 Rio Olympics. Then, he competed in taekonwdo. Now, he’s a cross-country skier; Taufatofua qualified for PyeongChang, despite never skiing until last year.

As Taufatofua jumped up and down to psyche himself up, a woman spritzed him with oil, as if she were a trainer preparing a boxer for a fight—in this case, with the elements. Taufatofua won again.

Why not just ski shirtless at this point? 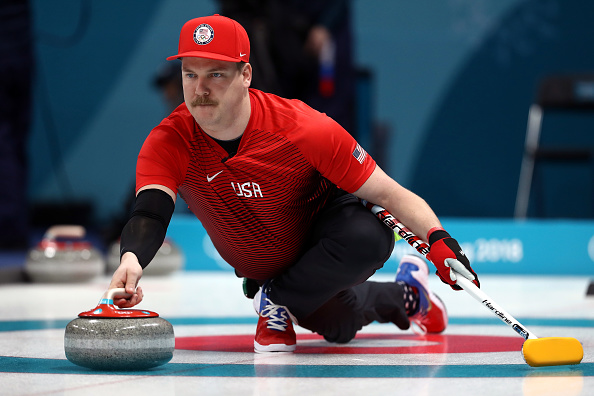 The Internet Is Convinced This Olympic Curler Looks Exactly Like Super Mario
Next Up: Editor's Pick