Meet Maame Biney, the First African-American Female Speedskater to Qualify for the Olympics

At 18, American short-track speedskater Maame Biney is one of the youngest members of Team USA headed to the PyeongChang Winter Olympics, which begin next week with the opening ceremony Feb. 9. She’s also breaking new ground — and ice.

When Biney swept the 500m short track races at the Winter Olympic trials in December, she became the first African-American woman to qualify for a U.S. speedskating Olympic team. (Erin Jackson, in long-track speedskating, became the second a few weeks later). At her trials races in Kearns, Utah, Biney’s father Kweku held up a sign that read “Kick some hiney Biney.” She warmed hearts with her giggly reaction to making the Olympic team. “It’s crazy awesome,” she said on Twitter.

Maame Biney was born in Ghana

Kweku has joked that in Ghana, where his daughter was born, ice is used solely to keep beer cold. When Maame was five, she came to Maryland to visit her father, who was settled in the United States. She cried when she arrived, and the tears didn’t stop until Kweku brought her to a J.C. Penney on a trip to the mall.

“As soon as we got in that store, she saw the big store, she started running around, from aisle to aisle,” Kweku told the Washington Post. “She says, ‘Daddy, I like this one. No, no, no — I don’t like that one, I like this one!’” Biney decided she wanted to stay in the U.S; her mother and brother still live in Ghana.

Read: The Complete Winter Olympics Schedule for 2018 – When To Watch Every Sport

Maame Biney was too fast for figure skating

Soon after Maame arrived in the U.S., Kweku spotted a sign while driving down a street in Reston, Va. “Learn to Skate This Fall,” the sign read. Kweku asked his daughter if she was interested in skating; Maame jumped at the chance. She started out in a figure skating class. But the coach suggested Maame take speedskating, since she was moving so fast. Kewku owes that coach a chilled Ghanaian beer.

Biney is a senior; her dad recommended taking a year off, but Biney wanted to graduate with her friends, so she’s doing her coursework online. After making the speedskating team, she wrote a note to her classmates on Instagram. “This last one is to my friends (from school) who got that I couldn’t do anything b/c I had a goal,” Biney wrote. “I’m so happy that you guys didn’t abandon me😂. I love how you guys tried to understand. It really means a lot to me💚” Biney plans on going to college, and is interested in chemical engineering.

The Winter Olympics host country is a short-track speedskating powerhouse; all but five of South Korea’s 26 winter gold medals have come in short track. Choi Min-jeong is a favorite in the 500m, plus the 1,000m and the 1,500m. South Korea could also win the 3,000-meter relay. Biney likely won’t cruise to gold. But don’t put an upset past her; she could be laughing her way to the podium. 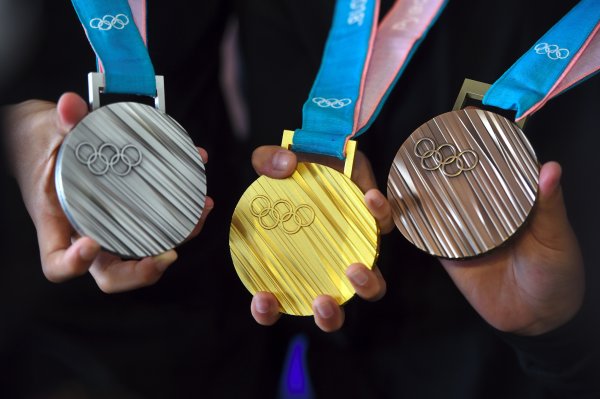 The Complete Winter Olympics Schedule for 2018: When to Watch Every Sport
Next Up: Editor's Pick