5 Nutella Recipes That Will Make You Say 'Peanut Butter Who?'

It’s tough to find a nut spread that has a global following like Nutella. For more than 50 years, the hazelnut-chocolate spread has been a mainstay topping for toasts, a sweet addition to ice cream and a delicious dip for crackers and cookies.

Originating in Italy from the same company that brought the world Ferrero Rocher chocolates, Nutella was first introduced to temporarily compensate for chocolate shortages during World War II.

In 1946, pastry maker Pietro Ferrero created a thick paste out of hazelnuts and sugar with a touch of cocoa called Giandujot. Five years later, the paste was remade into a more spreadable substance and dubbed SuperCrema.

By 1964, Ferrero’s son Michele Ferrero had changed the name to what we are all familiar with today and improved the recipe (although the Nutella recipe was altered to include more skimmed milk powder, the company admitted last year).

Nutella spread to Germany in 1965, where its famous jar label was designed. The spread picked up in popularity in France in 1966 and found droves of fans throughout Europe and Australia through the 1970s. But in the U.S., Nutella was slow to gain steam.

The spread was available in American supermarkets by 1983, but took a couple of decades and a dedicated advertising campaign that began in 2009 for people to come around, according to The Daily Beast.

Between 2009 and 2014, Nutella sales tripled to total more than $240 million. Ferrero SpA, the company that makes Nutella, cemented its foothold in the U.S. in January with the $2.8 billion purchase of Nestle brands, which includes Butterfinger and Baby Ruth.

Now, Nutella has exploded into more than a standard pantry condiment. People go crazy over Nutella — just last month, a video went viral of shoppers in France pushing and screaming at each other over a 70% sale on Nutella in supermarkets throughout the country.

Nutella even has its own unofficial holiday. Calling on all Nutella fans to join her in honoring the hazelnut-chocolate spread, blogger Sara Rosso created World Nutella Day in 2007. This year, World Nutella Day is on Monday, Feb. 5.

If you’re a Nutella lover, you already know there are more creative ways to show your dedication to the tasty spread than eating it in a hurry for breakfast.

Here are five of the best ways to use Nutella to celebrate the holiday.

Add a spoon or two of Nutella to your hot chocolate, milkshake, smoothie or even martini for a nuttier taste and impressive chocolate swirl.

Nutella mixes well in cake, cookie and brownie batters and makes for flavorful frosting and fillings. Add some Nutella to your favorite baking recipes or use it as the final touches on top of your oven endeavors.

Use Nutella for no-bake recipes

Baking isn’t for everyone — and if you don’t want to wait for a cake to cool before diving into Nutella, there are several no-bake recipes involving the spread.

From no-bake cookies and cheesecake to Nutella on toast or drizzled over some freshly-made crepes, there are countless ways to use the stuff.

Go a little nuts with Nutella

Dessert for dinner is always a win, so why not bake a pizza crust and top it with butter, Nutella and whatever topping you like for Nutella pizza?

If you want to take the Italian theme even further, Eater suggests combining Nutella with agar-agar – a gelatin substitute – until the mixture hardens so you can cut it into something akin to pasta.

Topped with blended strawberries, this Nutella spaghetti with “red sauce” is almost like dining at an old-school Italian restaurant, just a little sweeter.

Sometimes, the craving for sugar and chocolate hits and there is no time to turn on the oven and whip something up.

In these moments, the best Nutella recipe is to stick a spoon directly into the jar and eat it. Feel free to toast some bread or open a package of crackers, but only if you’re feeling fancy. 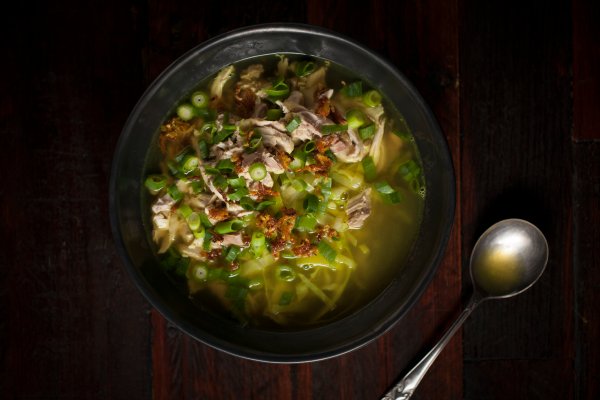 Weekend Recipe: A Hearty Chicken Soup That’s Good for Your Soul and Immune System
Next Up: Editor's Pick