Special counsel Robert Mueller and congressional investigators have interviewed roughly 50 people who work at the White House or were involved in Donald Trump’s campaign.

Based on a compilation by CBS of known interviews, that number includes at least 20 White House employees and one Cabinet official: Attorney General Jeff Sessions.

So far, it has not included Trump himself, though the president has said he’d “love” to talk to Mueller.

There may be more. The special counsel investigation is shrouded in secrecy, and many reports of interviews already conducted have been from anonymous sources, so it’s unclear exactly how many people Mueller’s team has talked to.

Here are 23 of the most important people we know who have been interviewed in the investigation, according to various reports.

First reported by the New York Times and subsequently confirmed to TIME by the Justice Department, Attorney General Jeff Sessions was interviewed by Mueller’s team in January. Sessions was a top surrogate for Trump during the campaign. He recused himself from campaign and Russia-related issues once he became Attorney General following revelations that he had misled Congress during his confirmation hearing about the fact that he had met twice with the Russian ambassador during the campaign

This marks the first known time that Mueller’s team has interviewed a member of Trump’s Cabinet.

The New York Times recently reported that former FBI Director Comey met with Mueller’s team in 2017. According to the Times, Comey was brought in “to answer questions about memos he wrote detailing interactions with the president that had unnerved him.”

Comey’s firing by Trump last May could prove to be a key focus of Mueller’s investigation for a possible obstruction of justice case against the president.

Former national security adviser Michael Flynn pleaded guilty last year to lying to the FBI and is now cooperating with the investigation. Flynn’s short tenure in the White House and his ouster after it appeared he had misled the Vice President about his contacts with Russia are reportedly of interest to Mueller’s team in their questioning of other witnesses.

Trump’s son-in-law and adviser met with investigators in November, the New York Times reports. Kushner was reportedly asked about a meeting he held with a Russian ambassador during the presidential transition and contacts between Flynn and the Russian government.

Former White House chief of staff Priebus was interviewed by Mueller’s team in October. “He was happy to answer all of their questions,” his lawyer said, Politico reports.

Former White House press secretary Spicer’s interview lasted almost a full day in October, Politico reports, during which he was “grilled about the firing of former FBI director James Comey and his statements regarding the firing, as well as about Trump’s meetings with Russians officials including one with Foreign Minister Sergei Lavrov in the Oval Office.”

Senior policy adviser Miller was interviewed about his role in Comey’s firing, among other topics, as part of the probe into obstruction of justice, CNN reports.

White House communications director Hicks was interviewed by Mueller’s team in December, ABC reports. Hicks has been a constant member of Trump’s inner circle since the earliest days of his presidential campaign in 2015.

Former foreign policy adviser Papadopoulos pleaded guilty last year to making false statements to the FBI and is cooperating with the government.

Former campaign chairman Paul Manafort was indicted on multiple counts in 2017, including charges of lying to the FBI. In 2018, Manafort sued the Justice Department, arguing that Mueller’s investigation went beyond its scope in charging him with tax fraud and money laundering charges from before he was associated with Trump’s campaign.

Former Acting Attorney General Yates, who was fired by Trump in early 2017, has cooperated with Mueller, according to NBC. She reportedly informed the White House about Flynn’s FBI interview after it happened (the same interview during which Flynn later pleaded guilty to lying).

CIA Director Mike Pompeo has also been interviewed, NBC reports, as a witness to events surrounding Trump’s firing of Comey. 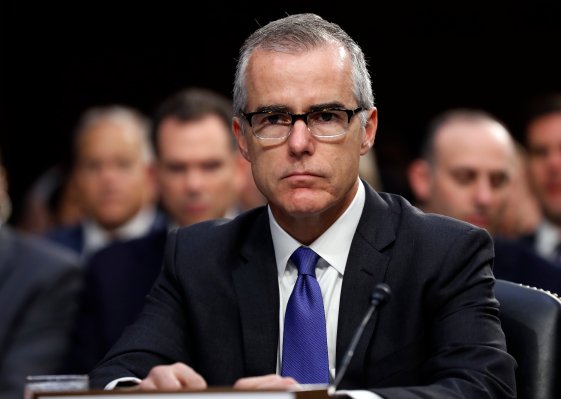 White House Does Not Deny President Trump Asked Deputy FBI Director Who He Voted for in 2016
Next Up: Editor's Pick