David Ige would have corrected this month’s false alarm about a ballistic missile approaching Hawaii earlier had he remembered his Twitter password, the Hawaiian governor told reporters Monday.

The Hawaii Emergency Management Agency issued an alert about a missile threat to Hawaii at 8:07 a.m. on Jan. 13, pushing an urgent message out to cell phones across the state and inciting widespread pandemonium. Ige learned that the message was wrong just two minutes later, according to the Honolulu Star Advertiser, but his office did not post an official correction for roughly 15 more minutes — a delay that has earned Ige and his staff some criticism.

When asked by reporters about the time discrepancy, Ige said he was making calls to Hawaii Emergency Management and other officials during that time, but also admitted he wasn’t able to access his Twitter account, the Star Advertiser reports.

“I have to confess that I don’t know my Twitter account log-ons and the passwords, so certainly that’s one of the changes that I’ve made,” Ige said Monday after his State of the State address. “I’ve been putting that on my phone so that we can access the social media directly.”

Hawaii Emergency Management did not post an official correction until 8:43 a.m., nearly an hour after the initial alert, Hawaii News Now reports.

Following the incident, the Federal Communications Commission released a statement saying Hawaii lacked “reasonable safeguards or process controls” that could have prevented such a false alarm, problems Ige has said will be corrected. 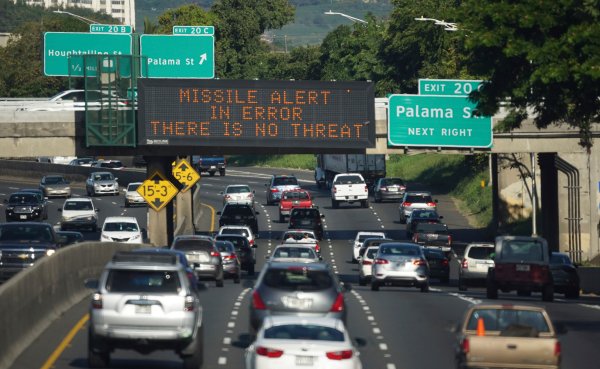 The Person Who Sent Hawaii's False Missile Alert Has Been Reassigned
Next Up: Editor's Pick