Appearing in SNL’s “Morning Joe” sketch with Kate McKinnon playing Mika Brzezinski and Alex Moffat as Joe Scarborough, Murray pulled down the hood of a dark cloak to reveal himself as Bannon. (In the past, the show has portrayed Bannon as a cloaked Grim Reaper character.)

“My god, Steve, I always thought you looked like death but this is death warmed over,” said McKinnon as Brzezinski. Murray’s Bannon was appearing on the show alongside Michael Wolff, the author of Fire and Fury: Inside the Trump White House, played by Fred Armisen.

Murray’s character denied the statements he made to Wolff that were published in the book — where he said that the meeting between a Russian lawyer and Donald Trump Jr., along with Trump campaign aides, was “treasonous.” (Bannon has apologized for the statement, calling Trump Jr. “both a patriot and a good man.” Bannon has also stepped down from his role as executive chairman at the Breitbart News Network.)

“The Bannon dynasty is dawning,” Murray said. When asked what he was a working on, he said he has an upcoming web series for Crackle called “Cucks in the Car Getting Coffee”, a line of “wrinkled barn jackets” and a springtime skincare line called “Blotch.”

As for political candidates Murray-as-Bannon said he plans to promote next, those include disgraced YouTube star Logan Paul, former drug company executive and convicted felon Martin Shkreli, and the former “Subway guy” Jared Fogel, who pleaded guilty to possession of child pornography and was sentenced to 15 years in prison.

“It’s time for America to slide down the Bannon-ster,” Murray said.

At that point, McKinnon and Moffat welcomed Leslie Jones playing Oprah to discuss her 2020 plans. “Well, I am a celebrity, so I’m qualified,” Jones as Oprah says. “But I’m different from Donald Trump because I’m actually a billionaire.”

“There’s only one job in the world more powerful than being president,” she continued. “Being Oprah.” 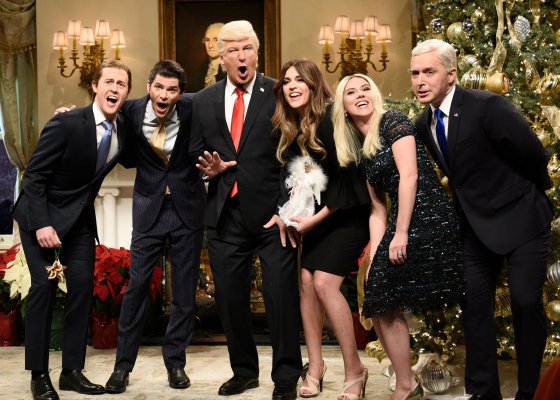