Natalie Portman Called Out the Hollywood Boys' Club at the Golden Globes. A New Study Backs Her Up

During Sunday night’s Golden Globes, the most powerful women in Hollywood donned black in support of Time’s Up, a new initiative designed to address pay disparity, discrimination and harassment in the industry in the wake of the #MeToo movement. The issue of behind-the-scenes representation came into sharp relief during the Golden Globes when Natalie Portman, one of the founders of Time’s Up, and director Ron Howard presented the award for Best Director.

“And here are the all-male nominees for Best Director,” Portman said pointedly. The actor was nodding at the Globes’ snub of Greta Gerwig, whose film Lady Bird went on to win Best Comedy and Best Actress that night. But Portman’s words also illuminated a deeper truth: Male directors get more opportunities than their female counterparts. New data shows the extent of that disparity.

Women made up just 18% of directors, writers, producers, executive producers, editors and cinematographers working on the top 250 grossing films in 2017, according to the annual Celluloid Ceiling Study released by San Diego State University. That’s just one percentage point higher than the 17% of women who held those positions in 1998.

Studios often argue that women are too inexperienced to handle big-budget films and yet hand massive franchises to male filmmakers with only one movie under their belt, like Gareth Edwards (Monsters to Godzilla), Josh Trank (Chronicle to Fantastic Four) and Colin Trevorrow (Safety Not Guaranteed to Jurassic World).

Again, the new stats speak volumes: Women comprised just 11% of directors working on the top 250 films in 2017. Things are beginning to change: Patty Jenkins, who directed Wonder Woman to the third place at the box office last year, was heralded as the visionary who upended studios’ retrograde thinking about women and big-budget films and has cleared a path for future female filmmakers.

The Celluloid Ceiling Study suggests that getting more women in the director’s chair is key to helping other women in the industry. An analysis of last year’s top 500 films found movies with at least one woman director employed higher percentages of women as writers, editors, cinematographers and composers than films with exclusively male directors. For instance, women made up 68% of the writers on films directed or co-directed by women, whereas women made up just 8% of writers on films directed exclusively by men.

The change will take time. Though Time’s Up founder Ava DuVernay’s much-anticipated Wrinkle in Time premieres this spring, the slate of female-directed studio films remains spare. The initiative hopes to achieve a 50-50 male-female split in the industry by 2020. 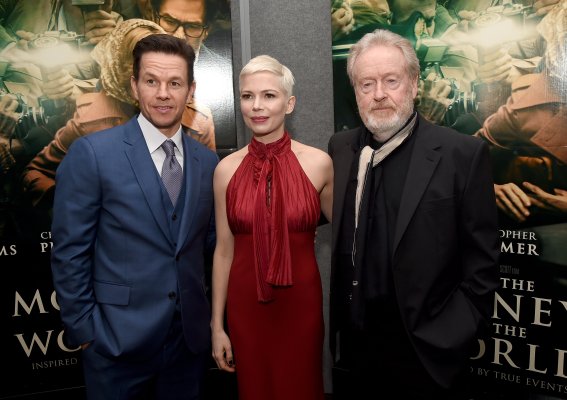 Mark Wahlberg's 'All the Money' Reshoot Pay Draws Scrutiny
Next Up: Editor's Pick