Why People Are Calling Out James Franco After the Golden Globes

James Franco accepted the Golden Globe for Best Actor, Musical or Comedy on Sunday night with a “Time’s Up” pin, which signifies support for the fight against sexual misconduct in Hollywood, on his black suit. But some 2018 Golden Globes viewers were upset to see Franco wearing the pin, saying they don’t believe The Disaster Artist actor has treated women with respect in the past.

The Breakfast Club star Ally Sheedy tweeted — and later deleted — comments about Franco and Christian Slater with the hashtag #MeToo, which women and men began using in October to share their own experiences with sexual harassment and assault. Sheedy did not include a specific allegation against Franco, and a spokesperson for Sheedy did not immediately respond to TIME’s request for comment.

“Ok wait. Bye. Christian Slater and James Franco at a table on @goldenglobes #MeToo,” Sheedy wrote in one now-deleted tweet.

“James Franco just won. Please never ever ask me why I left the film/TV business,” Sheedy wrote in another.

Representatives for Franco and Slater did not immediately respond to TIME’s request for comment. Franco directed Sheedy in a 2014 play, The Long Shrift.

Other Golden Globes viewers took to Twitter to criticize Franco for his alleged treatment of women in the past, including two women who made specific accusations against the actor. Some of the tweets focused on a 2014 incident in which Franco allegedly hit on a 17-year-old girl on Instagram.

According to Gawker, the 17-year-old in the 2014 incident met Franco outside his Broadway show, Of Mice and Men. Franco and the teen later connected on Instagram, and she told him she was “nearly 18.” He allegedly later asked her where she was staying in New York and asked: “Should I rent a room?”

In an interview on Live! With Kelly and Michael in April 2014, Franco addressed the incident. “I’m embarrassed, and I guess I’m just a model of how social media is tricky,” Franco said. “It’s a way people meet each other today, but what I’ve learned is you don’t know who’s on the other end. I used bad judgement and I learned my lesson.”

In an interview with Howard Stern later that month, Franco said that he wasn’t intentionally pursuing teenage girls. “Seventeen is legal in New York, but that being said, it’s still pretty damn young,” he said. “They make it out like I’m pursuing young women. I’m not going to high schools looking for dates.”

Franco wore a “Time’s Up” pin at Sunday night’s awards ceremony, but — like a lot of men — didn’t explicitly address Hollywood’s culture of sexual harassment or the broader initiative to fight the industry’s inequality in his acceptance speech or on the red carpet. 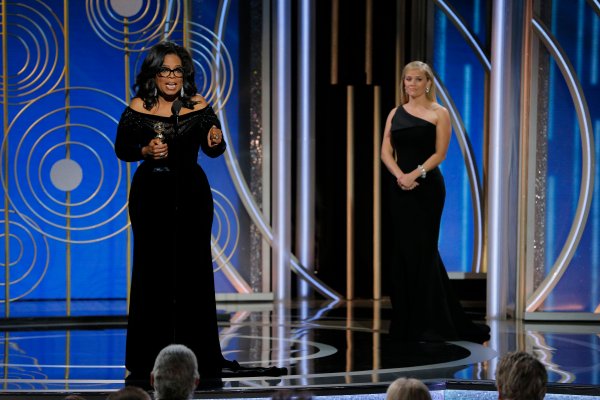 Reese Witherspoon Showcased an Award-Worthy Oprah Impression at the Golden Globes
Next Up: Editor's Pick